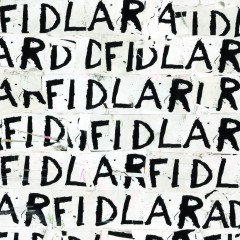 Fidlar, formed of four guys from LA, bring their self-titled album to our shores, and it’s nothing short of memorable, rowdy rawness. The 14 tracks make up a gritty backbone that will soon if not already establish this band, dragging them out of the back streets of the underground scene and placing them fearlessly and certainly confidently on the radar of new music for 2013.

From when ‘Cheap Beer’ kicks in, there is a riot between the squealing ear-piercing guitar vs the chanting vocals full of bold, head strong ambiance. ‘Stoked And Broke’, ‘Whore’ and ‘Max Can’t Surf’ are quite frankly, about being young, free and drunk. Track after track, it fills to the rim with intentions of trouble and havoc. These guys aren’t reminiscing, they’re living the good times and ‘5 To 9’ is the mob telling us in under 70 seconds that they have no plans on growing up any time soon.

Despite tracks like ‘Gimme Something’ overflowing with opinion they’re just a bunch of kids that are telling it how it is, but simply, they balance being too chilled to start a revolution but have the energy and balls to shout down many of the big dogs also releasing music this year. It’s the huge intro in ‘White On White’ and the sing along melody in ‘Blackout Stout’ that are going to make Fidlar a house hold name, raging even the biggest veterans of punk and hardcore.

Stand out track ‘Wait For The Man’ could even one day play host to that beer ad, just put Fidlar in a beach hut with surf boards and a few pints and off they go.

Each of the 14 slices have been produced with liberty and commotion in mind, and despite being mixed and handled by Rob Schanapf (previous duties: Elliot Smith, Beck, Guided By Voices) what remains is consistent freedom to do whatever the hell they want.

Catch Fidlar on their UK tour in February