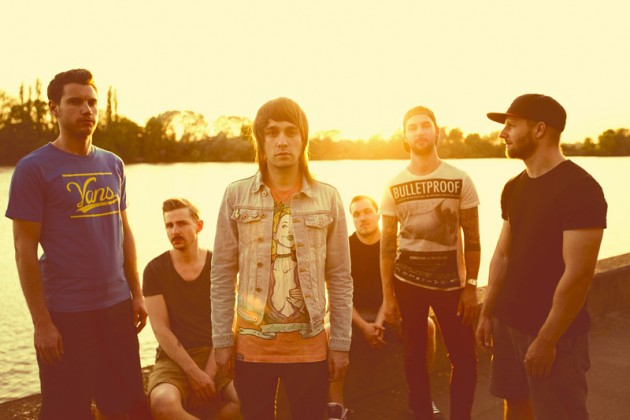 Devil Sold His Soul released their third album ‘Empire of Light‘ on the 17th of September and courtesy of the folks at Banquet Records, they celebrated with a release show at the Fighting Cocks in Kingston that night.

If you’ve ever been to the Cocks then you know it’s a rad little rock pub that has a leopard print pool table, and has hosted some amazing shows in conjunction with Banquet (the local independent record store, run by people who love their music as much as we do). For example Four Year Strong, Tonight Alive, Let Live and New Found Glory have all graced this tiny stage. So, keeping all that in mind as well as this show being a sell out, the evening promises to be something very special.

First up to break the ice is the jaw-droppingly amazing band The Elijah. If you haven’t seen them, or heard them before, then this is a band you have to see to believe. Their music is a big batch of prog-rock, alternative and melodic songs that hit you hard. Although their set is only a short one tonight, within a minute of playing they’ve captured everyone’s attention and hold it right until the end. Their headline Underworld show on November 16th, is definitely a date for your diary, you won’t regret it.

Shadows Chasing Ghosts are up next, if I had to define SCG’s style I’d say throw Alexisonfire into a room with Asking Alexandria. So to follow The Elijah is a big ask, and to warm up the stage for the Devil boys is a pretty big ask too, one can’t help but feel a bit sorry for Shadows Chasing Ghosts as the room empties a fair bit. Unfortunately, he sounds not quite right either, making it a set full of good intentions, but it’s only just adequate in comparison to The Elijah.

Then with a quick sound check out of the way Devil Sold His Soul come on, and the room erupts as the band launch into their set. The room starts to heave as one mass, and everyone’s heads start to rock as the boys launch into an epic metal soundscape. The band are pitch perfect, you actually get nearly the same sound as you hear when you listen to the albums at home. It’s genuinely amazing. Every single person in the room is moving (to some degree) all the way through this set. Think metal meets the Pied Piper of Hamelin as everyone’s hypnotized by the set.

It was genuinely a pleasure to witness this intimate gig from a band that could definitely command the attention of a far bigger audience. They rip their way through most of Empire including a searing rendition of ‘A New Legacy’, but they also throw in some older material in the shape ‘An Ocean of Lights’, ‘Drowning/Sinking’ and ‘Dawn On The First Day’. I thoroughly recommend catching them on their tour later this year.