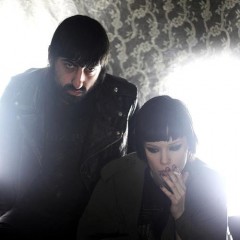 After debuting a new song from their forthcoming album at Reading & Leeds over the weekend, the insane electro duo Crystal Castles have announced details of a UK tour this autumn and commented on their imminent 3rd album release:

“Oppression is a theme, in general… A lot of bad things have happened to people close to me since ‘II’ and it’s profoundly influenced my writing as I’ve realized there will never be justice for them. I didn’t think I could lose faith in humanity any more than I already had, but after witnessing some things, it feels like the world is a dystopia where victims don’t get justice and corruption prevails. I’m one step away from being a vigilante to protect people and bring justice to the people I love. I’ve thought about it.” – Alice Glass

“We wanted the new album to sound like a completely different and new experience. Any keyboards and pedals used on ‘I’ or ‘II’ were traded for different keyboards and pedals so that there would be a new palette of sounds to work with. We wouldn’t allow any computers near the studio, everything had to be recorded to tape. We’d limit ourselves to 1 take because we believe the 1st take is the rawest expression of an idea.” – Ethan Kath

The tour dates are as follows and you can watch Crystal Castles perform the new song ‘Wrath of God‘ below: