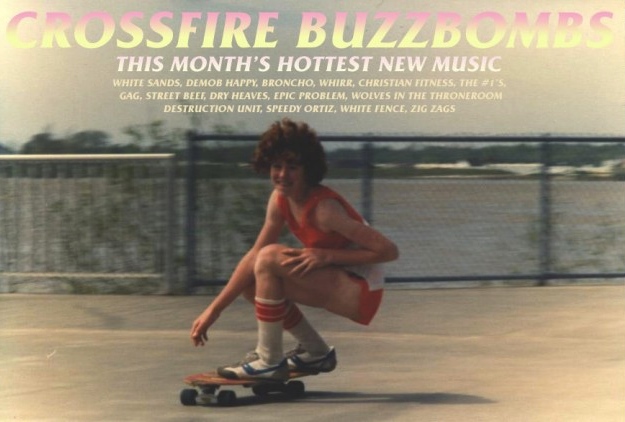 Either the most annoying track of the summer or the most genius for getting under your skin, but whatever you personally get from this tune Broncho pack a presence, bring an unforgettable stutter like no other and are about to drop an album up there with MGMT, Flaming Lips and Wavves. This is going to be one of my favourite albums of the year already and I’ve only had it 2 weeks. Feast on it. – Zac

Their ‘Wooden Head’ album has been playing weekly in our office and rightly so, it’s a fantastic indie record worthy of your ears. ‘Now I Understand’ though is a big stand out track that oozes class and gets right under your skin. It’s a summer 2014 piece of art and I absolutely love it. – Zac

When members of three exceedingly cool London bands come together, chances are they’re going to sound pretty awesome. White Sands, made up of members of Male Bonding, Novella and Mazes, make a swirling racket of noise-gaze in their first track ‘Years’. Taking elements of their respective bands but making a product that sounds completely different is a skill that White Sands have mastered in just four minutes. – Joe Parry

Zig Zags – ‘Voices of the Paranoid’ (In The Red Records)

Along with OBNIII’s the most exciting new band this year, Zig Zags drink gasoline from jerrycans like the similarly acronym-ed ZZ Top. Then with their bladders suitably full, they knock Slash’s top hat off and empty their chambers into it before eating pizzas in a TV party in front of a John Carpenter slasher-flick. You wouldn’t dare make eye contact, yet you won’t be able to take your eyes off them. Too busy having a laugh to name their album, it’s a calling card not heard since the opening salvo from Cerebral Ballzy. Off their faces and in yours via the label of garage quality In The Red Records and brought to you by that man again Ty Segall just before he unleashes his own new banger ‘The Manipulator’. With songs like ‘Brainded Warrior’ and ‘Tuff Guy Hands’ it’s sure not big and clever but there’s no bigger tune than album closer ‘Voices of the Paranoid’, it’s like Ozzy met Fozzie and ate the head clean off a poisonous green frog. – Nick Hutchings

In their debut album Pipe Dreams, Whirr made a strident attempt to push the boundaries of shoegaze into an arguably more accessible sound than their drone-laden forefathers. With new track ‘Mumble’, it’s clear they’re pushing their limits even further with a bass heavy slap in the face, more likely to soundtrack a nightmare than a dream. – Joe Parry

Straight off the back of How to Stop Your Brain In An Accident, Future Of The Left’s enigmatic frontman, Falkous, steams in with a fantastic album of in-your-face, punk injected ditties. Now operating under the guise of Christian Fitness, ‘aghast, anew, anon’ is a prime example of what to do when left to your own devices with some recording equipment. Get this fast-paced fury in your ears as soon as is physically possible. – Dave Palmer

Tim Presley of White Fence first got under my skin and made my follicles stand on end with Hair, the goose bumper-car of an album co-headlined and co-recorded with garage land icon Ty Segall. Recording Nuggets that you can see for miles and miles, the 4-4 psych continued with another 4 track lo-fi album on Castleface, but now with album For The Recently Found Innocent on Drag City, Presley has dragged himself into a studio with real knobs on. Never fear though, he hasn’t forgotten where the action is, and that’s in the spirit of California in the 60s, from the Chocolate Watchband to The Standells. He is also a songwriter in the best spirit of modern day storytellers Bob Pollard and Brendan Benson. The fact that he apparently also talks a good game is no surprise given how effortlessly this album zips by leaving barbed hooks in your lobes with ear-worms attached. This righteous riot not far from the Sunset Strip was recorded by the aforementioned Ty Segall, and it seems only right that he returned the favour given how much Presley brought to his party. ‘Like That’ is the pick of a tight bunch and you’ll definitely like it like that. – Nick Hutchings

Feedback soaked, utterly deranged and utterly brilliant hardcore, this track serves as a teaser for their upcoming LP out on Iron Lung Records. Released with an absolutely ludicrous video filled with chains and men in balaclavas. Now please, can we have some UK dates soon? – Tim Lewis

This is the opening track to London bruisers, Street Beef’s second demo. A step up from what’s come before without reinventing anything, inspired by the stompiest of 80s hardcore, this was always going to be a rager. Side to side into all of your mates. – Tim Lewis

Thrashy surfed out hardcore punk from the Kids of the Lughole, California circa 1980 via Sheffield. The Sheff punk scene has been thriving ever since I’ve lived in Yorkshire and Dry Heaves are one of the best bands to come out of it, with a couple of killer EP’s under their belts and an always raw and fun live show. If you like your punk loud, fast and snotty, look no further. – Jono Coote

The kings of noise rock have delivered yet another deliciously deafening fix. ‘Dust’ see’s Destruction Unit staying true to their chaotic credentials whilst simultaneously straying towards a more traditional ‘song’ structure than their usual psych-outs. Keeping it under three minutes, and fusing pure distortion with ferociously catchy hooks, this is a prime demonstration of how to craft a sensational head-banger. – Dave Palmer

Earlier this year Epic Problem’s EP Lines showed a band fast developing their down and dirty street punk into something special, with hooks aplenty to match to snarled vocals and distorted guitar licks. The first track released from their upcoming split with Holiday on Pumpkin Records, ‘Petrol Blue’, shows no signs of them letting up. Boisterous shout-a-long street punk of the kind befitting alumni of Blitz, the Dangerfields and Dead Subverts, this track latches a whiskey soaked set of gnashers into the spot on your brain where songs get stuck and refuses to be shaken free. – Jono coote

Inventive black metal band gets more inventive. Switching guitars for synths is bound to upset some purists however this track is some of the most expansive work in their discography. It will be interesting to see how some of the more “metal” side of the press take to it but with bands pushing extreme metal such as Anathema and Deaf Heaven thriving, one wonders where this upcoming record Celestite will take them. – Tim Lewis

If you dig these tracks as much as us, and would like to contribute to the next feature, get in touch.