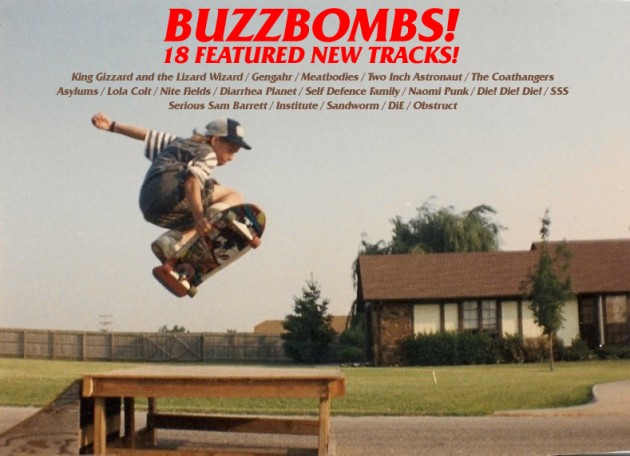 Despite having a down right daft name, King Gizzard and his Lizard Wizards prove they can kick out a toe tappin’ jam with ease in their new tune ‘Hot Water’. Leaning on a flute indebted groove, this weird country boy ramble borrows heavily from 60s boogie boys Canned Heat, a serendipitous encounter indeed. Crank it up and let the good times roll. – Dave Palmer

They may have a band name that will have most spell incorrectly, but on record, this dreamy indie quartet spell out their message in lush waves of laid back guitars and reverbed vocals. Rack up a line from their latest track ‘Powder’ filled with a cool dose of flaccid house. Out now. – Zac

If you like Thee Oh Sees, Ty Segall, In The Red Records and Mikal Cronin you’ve hit pay dirt, as some of your favourites have come out to play! Meatbodies is the band of a fella named Chad Ubovich, guitarist and crony of Cronin, and axe meister general in Segall’s Led Zep leaning power trio Fuzz. This self-titled record by his own band was recorded with the minimum of daylight and the maximum of smoke clouded vibes in a basement in San Francisco with Eric “King Riff” Bauer at the helm and Segall also on hand with an instrument or two. Like the best moments of Slaughterhouse and coming on like the Coachwhips, the Meatbodies are lean to the bone and waiting to take the throne. By which I mean the toilet from where they will defecate many more solid nuggets of garage goodness. – Nick Hutchings

Countless bands look for the 90s for inspiration. Nothing wrong with that – there was a shit load of good music which came out of that decade. Two Inch Astronaut take the template laid out by DC bands like Dismemberment Plan and Jawbox and mix it with fuzzed out urgency and angular riffery that fans of early Biffy Clyro will appreciate. – Joe Parry

One of the more restrained tracks from Atlantan punks The Coathangers latest record Suck My Shirt, ‘Drive’ is no less spiky, despite its sugary sweet vocals and pining lyrics of lost love. – Joe Parry

This lot are spot on. TV died years ago and is only there for the sheep-like morons who have absolutely nothing interesting in their lives anymore. Asylums explain their rage in this spitting minute and a half punk rock track that bursts with spazzcore-like energy fronted by scathing lyrics. Load this up and push it hard into the ears of every 9-5 commuter on the journey to their shit job. – Zac

Mysterious six-piece psych collective Lola Colt have finally put the date on the calendar that their fans have been longing for. October 27th will mark the release of Away From The Water, the band’s long awaited debut album. To keep you entertained, they’ve just dropped a cosmic visual for album track ‘Driving Mr Johnny’. Check this out and prepare yourselves for an album of surely epic proportions. – Dave Palmer

Nite Fields deliver admirable shoegaze swirls to please your retrospective ear. The four piece joined forces during the cold, wet Melbourne winter to craft a whole album’s worth of enticing sounds such as these, harking back to Ride and The Chameleons for influence. It’s due early next year via Felte. – Dave Palmer

For ‘Bamboo Curtain’, the fantastically named Diarrhea Planet have slowed down the party punk they’re known for, bringing in some hazy early Weezer vibes. No less immediate than the more franticly paced back-catalogue, the track is a mini-epic that clocks in at just 1.53. – Joe Parry

My favourite band of modern times, SDF from all over the world. Patrick Kindlon and co. return with another instalment of their Island series (this time recorded in Scotland). Two extremely strong tracks, the B-side, ‘Cottaging’ could be considered a career best. Kindlon’s lyrics detail a failing relationship which is both extremely intelligent and depressingly easy to relate with. Elements of post – punk and alt rock, if you have even the slightest interest in either of these genres, this is pretty essential. – Tim Lewis

These Olympian punks have lit up DIY spaces and large concert halls alike with disorderly garage tones since their inception in 2012. ‘Firehose Face’s ear shredding bass and guitar grind delivers a ditty that’s both aggressive and anthemic. Their second album Television Man is out now. – Dave Palmer

Yep, Liverpool’s SSS are back with ‘Limp. Gasp. Collapse.’, their fourth slab of hardcore/thrash crossover genius, and they’re only getting better (and angrier) with time. ‘Beige’ kicks off with the band’s trademark breakneck speed and razor-sharp riffing, but the subsequent crushing breakdown is as unexpected as it is awesome. Oh, and check out those lyrics… you’ll never eat chicken nuggets again. – Alex Gosman

Yorkshire skate folk ripper Serious Sam Barrett has spent many a year on the road with a ‘board on the tarmac and guitar in hand, and new album AnyRoad is the perfect encapsulation of this life. The record’s perfectly crafted melodies underpin tales of love, booze and hillbombs. Taking elements of folk, country and rock ‘n’ roll, the pace switches effortlessly from high octane stompers to ballads without a song seeming out of place. An infectious enthusiasm for subject matter and for the music itself shines through brightly, this is the perfect encapsulation of RWTB! – Jono Coote

Having already picked up a huge amount of hype from their incredible Giddy Boys EP on Katorga Works, Texas’ Institute are back with the Salt EP. Released by Sacred Bones, home to The Men, Zola Jesus and Pharmakon, it appears to be the perfect label for them. Oi influenced post – punk, two genres that seem to be somewhat in vogue within punk and hardcore, it very much feels like a record that could become quite important as times goes on. One wonders what the signing to Sacred Bones means for Institute, perhaps a more avant-garde approach for the next record? Perhaps something more accessible? It will be very interesting to see. – Tim Lewis

Sharing a split album with the more esoteric strains of Rhode Island band The Body, Sandworm play a route one squall that’s like a monster rising up from the Dune. ‘Desert Warfare’ is like a Taser to the sub-cortex, but the record from whence this came was probably forged over the more pleasant experience of sharing a pizza. Hawaiian? I’ll tell you why… cos Pat Reilly of Sandworm worked at a pizza joint with The Body drummer Lee Bufford. The other Sandworm member Ben Eberle went to watch The Body more than 100 times in Providence, and as providence would have it, ended up contributing vocals to their albums – and now to top that their band is on the other side of a record with their heroes. Sandworm’s music is as gratifying as a tasty slice of pizza but you’ll feel very dirty afterwards. – Nick Hutchings

The opening track of the second EP from London / Leeds punks. Their first record garnered much praise around the world, New York’s Alright festival flew them out to play on the basis of six (excellent) songs. DiE are clearly believers of the “if it ain’t broke don’t fix it” approach as this new record is more of the same. A perfect mix of SSD and Discharge, who can argue with that? They play the Static Shock Weekend next month and every show is a killer, be sure to turn up. – Tim Lewis

Wading in on the front lines of the new wave of UK hardcore punk, Obstruct play pissed off blasts of straight edge madness influenced by early Boston and late 80s NYHC. This is music to get you down the front of the pit or pushing full speed down the street powersliding at cars, whichever is more appropriate at the time. Three short, sharp self-penned blasts bought to a close nicely with a cover of the Varukers’ Soldier Boy, this is hardcore music the way it should be! – Jono Coote

Want to write for us and submit music? Head to our contact us link at the very bottom of the page.