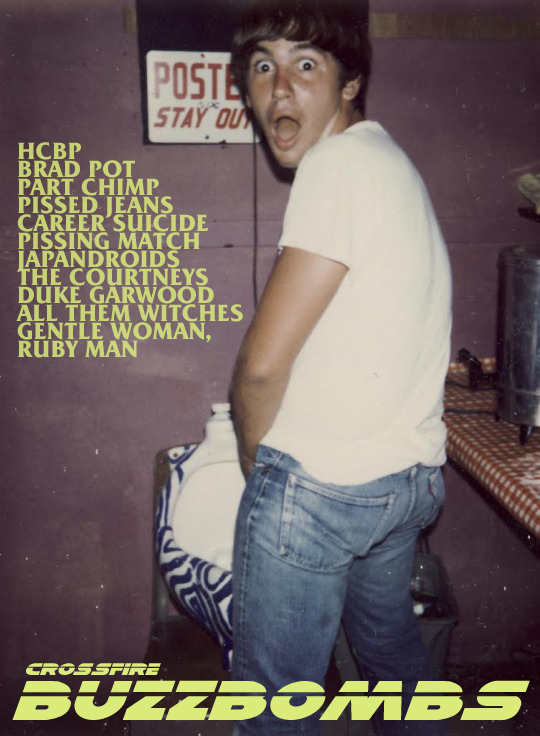 May as well kick this off with a bang. Matt Reynolds and Tom Marsh from Heck (formerly Baby Godzilla) started a side project that absolutely rips. This first thunderous slice of stoner wizardry paints a very fuzzy and dirty world that we are intrigued to find much more about. Turn it up to 11 and jump around your living room.

If you’ve not come across Melbourne garage-punkers Brad Pot yet then here’s a taste of what opens their new LP. Sneering, gritty punk rock with a subtle stench.

Toronto’s rip roaring punk’s Career Suicide, who have never put out a duff release, are back with another totally in-your-face, razor sharp slice of spitting and sneering hardcore in full length format. Don’t you dare miss this.

The Dead Kennedys once said “I Like Short Songs” and with hardcore, you can’t really go wrong. This album in particular is all over in 5 mins. Fill your brains with some Pissing Match and then go shred a bowl.

Pissed Jeans getting fit-as-fuck is a pleasure to watch. Pick up their new album, Why Love Now on Sub Pop for another classic dose of raging punk rock from this lot. It’s not their best release but you will certainly hear more melodies than usual.

Let’s take this down a level and appreciate some serious jamming. This lot take blues in its traditional form and spit it back at you with desert dust and marshmallows roasted on open fires. A proper musicians band for real music fans. This is lifted from their new album, Sleeping Through The War of which will suck you in and leave you wanting to move that needle straight back into the first groove. Pick it up on vinyl for the best results.

Part Chimp are back after eight (!) years’ gestation. They found the artwork to their new album in a bin, but that’s fine, ‘MapoLeon’ will knock your sonic socks clean off with its potent riff that, in an altered state, could well sound like Big Business covering ‘Molly’s Chambers’. Don’t miss what’s sure to be a release show of beyond earth-shaking volume levels at London’s 100 Club on April 28th.

How do you follow up an album like Celebration Rock? Write another one in exactly the same totally anthemic, uplifting, heart-breaking, heart-warming, inspiring, tear-inducing, fist clenching, scream-along-and-blow-your-voice-out vein, that’s how! Shepherds Bush Empire, May 6th. You’d be insane not to be there.

Some would say that to mess with the work of Roy is blasphemous and perverse, but White & Morrissey’s take is as close to the original as you could get and all the better for that. See this band live at any opportunity and look out for their guitar player’s remarkable stage antics.