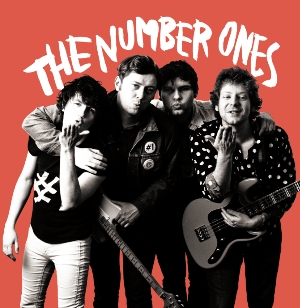 Ever since the hardest, meanest band ever, Crowd Control, played their last show, the members have been extremely busy. Going on to play in bands such as Strong Boys and Disguise as well as others, the most interesting post-Crowd Control band is definitely The Number Ones, a punk band taking influence from late seventies / early eighties power pop. This LP serves as a collection of all their work up to this point and is vital to anyone with even an iota of interest.

Current fans of the band may be disappointed to find that there are only two new songs, Favourite Game and Heartsmash, however both keep the extremely strong form seen in their previous records. Whilst I understand the disappointment, the demo tracks and ‘I Wish I Was Lonely’ single have been re-recorded and sound all the better for it, while ‘Tell Me Why’ is now one of the strongest songs on the record because of this. The Sharon 7” they released late last year was probably my favourite record of the year so it’s no surprise to say that they are the stand out of the whole LP, ‘Girl’ especially, with the four way harmonies on the final chorus are as brilliant as anything you will hear this year.

Lyrically is where this record really stands above its contemporaries. With ‘Boy’ features the lyrics “That boy crosses my mind a lot, cause he’s more hard than he is soft” and “He’s got six other brothers, they’re expecting and another and then they’ll be happy with their lot”. Lyrics made even more wonderful when sung in their charming Irish lilt, their verse is so brilliantly simple and easy to relate to, I really hope more and more people take note of this band.

The Dublin punk and hardcore scene is something that is very close to my heart. I find myself falling back in love with the scene’s wide range of bands so often, from the grungey, hardcore influenced Nibiru to the Lockin’ Out worshipping Bang Bros, The Number Ones are yet another brilliant and totally different band to what has come before. To have a collection of ten songs on one LP and for it all to be utterly brilliant puts them ahead of any other band attempting this style of music. An album thoroughly recommended to anyone who gets off to The Exploding Hearts, Buzzcocks or even fellow countrymen, The Undertones. Utterly essential.