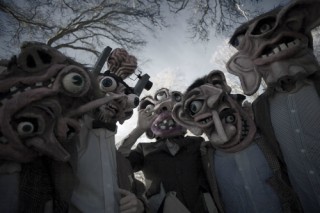 With a barrage of riffs cutting through like razorwire from the outset, Storm Bandage is the first track to be released of The Body Rampant’s debut album. It’s crisp and clean but hard hitting, produced by the legend that is Brian McTernan. With some old school emo style melodies, The Body Rampant give a taster of what’s to come with their full length – ‘Midnight Mayfair’ is an album which promises a kaleidoscope of snapshots into a conceptual character’s life and death.

Hailing from Southern California, The Body Rampant use some interesting imagery, employing the use of some rather freakish masks for photos and videos. Their soundscapes do contain that tinge of prog and old school emo yet the melodies have hooks galore and you can’t help but sing along. Definitely recommended if you’re into Deftones, Circa Survive and / or Thrice.