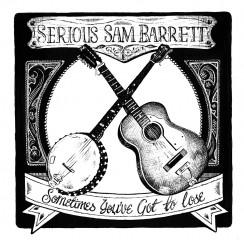 Sometimes You’ve Got To Lose is Serious Sam Barrett’s first release since 2014’s AnyRoad, and sees the same heady swirl of love, life and skateboarding occupying its subject matter as his previous output has ever done. Sam’s blend of genres, Yorkshire-cana is the closest description currently put to it, incorporates healthy doses of folk, blues, country and rock n roll into a sound which, despite the previously listed elements, still sounds undeniably birthed from The Ridings. Sam’s music is as powerful as it is because, despite being deeply personal, it takes from the aforementioned genres their accessibility and universal appeal. Whether you’ve loved, lost, sat at a petrol station in a strange place drinking coffee at sunrise, put in the blood, sweat and tears to build a DIY skate spot, gone out for a quiet drink and suddenly found yourself dancing on a sofa at 3am clutching a bottle of bourbon, put yourself in hospital skateboarding and counted down the days before you could next feel the sensation of truck on coping, sat in a van for hours talking nonsense with your mates – any of those things, then Sometimes… will be an album you relate to.

It’s music with soul – much like the punk and hardcore bands whose influence is visible, if not in Sam’s sound itself, then in a DIY approach to his craft. The songs on this newest album see a lean back towards the folk and blues end of the spectrum, closer to his early releases than his last and more country influenced LP. This is undoubtedly due in part to a return to recording songs live in the same style as his first couple of records. A 12 string, vocal chords and the occasional banjo are the instruments of choice, creating a rich wall of sound much more than the sum of its parts from the get go. The title track might reference breaking a wrist before tour last year and ably sum up the recovery process, not being able to play guitar or skate, but it is from the start that we see love being the overriding theme of the album – whether that be to his other half (who produced the killer zines which accompany the first couple of hundred records), to the particular satisfaction to building and skating your own DIY spot or to the joys of being on the road, this is distilled PMA at its finest.

‘Sailor’s Song’ opens proceedings and sound-wise, would not be out of place on 2009’s Close to Home. A rolling pace and finger-scorching 12 string lick, as well as a melody which defies the listener not to be drawn in, are a formula bought to bear both here and on the title track. These two songs, with their respective themes of love and of absolutely wrecking yourself taking a good, solid slam, book end the yearning post tour blues of ‘Drive Your Way Home’. The title track is followed by ‘Shoals of Montana’, the one banjo-picking track on the album with a haunting melody that sounds like it could have been written any time between now and 1900. ‘The Last Thing’ and ‘My Last Sad Song’ are the closest nods to straightforward country songs on the album, while in between them the brawling folk stomp of ‘Single Drop of Rain’ leaves its mark strongly. ‘Me and you Tonight’ is a tender love song which sees the first appearance from another musician, as Sam is joined by Frosty AKA Squeezebox Bob on the accordion. LBP represent…

Frosty’s able assistance continues into the album’s closing tracks; ‘I’ve Been Trying’ and DIY spot ballad ‘New Bird, Needle and the Dustbowl’, Sam’s ode to one Liverpool and two Yorkshire skatespots built guerrilla style under the council radar by locals for the love. This celebration of what can be achieved with DIY ethics and a community of people on the same page is a fitting end to the record, running pretty much parallel as it does to Sam’s own method of recording and releasing records. Run from a label created by him and Matt Bradshaw, with artwork by Sami Graystone and the previously mentioned zine courtesy of Kate Bristow, Sometimes… slots perfectly into Sam’s catalogue of releases and shows just how music flourishes away from the industry and big record labels. This one is pretty much guaranteed to not leave the record player for weeks and leave you wanting to experience his music in a live setting – which he proved on the tour for this album that he can power through even with an unexpected re-broken wrist, showing no signs of the injury having slowed him.

Apart from during the writing of this review, I last listened to the album a couple of days ago on the train back from Yorkshire, following on from a two-day-heavy session at a DIY skate spot, stoned and half drunk on a fast diminishing bottle of wine as I watched the sun set over the countryside. If possible, I can’t recommend this environment for listening to this album highly enough.