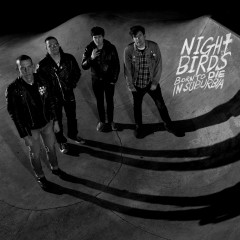 Some great albums have dropped so far in 2013, and this new long-player from Night Birds is destined to be right up there in a lot of Year End Top 10’s. Read on folks, cuz it’s an absolute blinder.

Having cemented their reputation with a bunch of EP’s and 2011 album “Other Side of Darkness” they lost guitarist Mike Hunchback. The wheels might have come off the trucks, but luckily for us an able replacement was enlisted – PJ Russo. They got back to business, and the resulting songs are possibly their best yet. I’ve been playing this album to death, and it still sounds great on each and every listen; it’s a record that’s built to last.

What’s the magic? Well, for an old guy, who’s been listening to Punk Rock longer than you can imagine, this is music that captures the wild-ride of early 80s north American hardcore, but is delivered in a fresh and vibrant manner. They classically combine the tough sarcastic bite of East Coasters like The Left, Chronic Sick, and The Freeze, with the snotty SoCal beach belligerence and swagger of D.I. and Agent Orange. I’ll throw the DK’s and Damned in to the mix too, what more could you want?!

When some Hollywood upstart decides to remake “Suburbia” (ask your Dad) one of these days, cue Night Birds to play that hall where the brawl goes down. I suggest they play “Nazi Gold”, which is not only my favourite song on this album, but one of the BEST songs I’ve heard all year. And it’s one of 4 tracks here (inc. the Fat Wreck single “Maimed for The Masses”) that break the three minutes sound barrier to barreling effect. The rest of the songs mostly barely trouble the 120 seconds mark, and all shred good ‘n hard.

So, there you have it, killer album, and it might only be August, but this is already shaping up to be my Record of The Year.