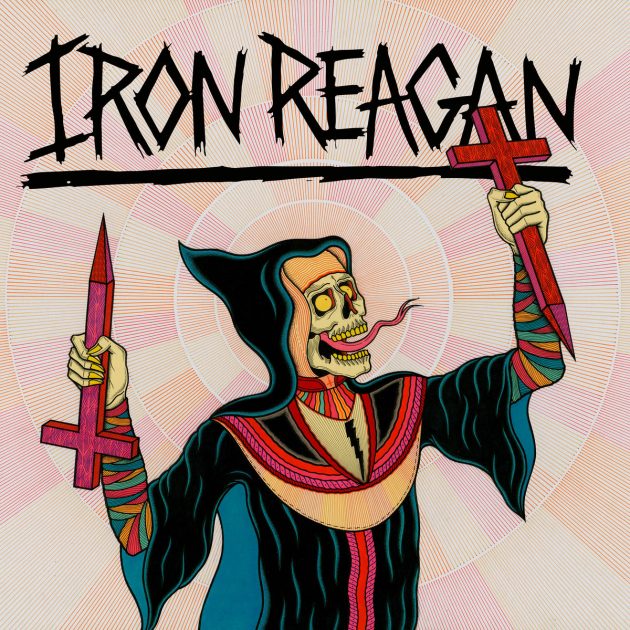 While I’d been hearing the name banded around for a while previous, I first saw Iron Reagan at Mighty Sounds Festival in the Czech Republic in 2015. Amongst a bill which clung loosely to the totem of ‘punk and ska’ – an umbrella which encompassed the likes of Babylon-hunters the Cockney Rejects and laid back modern reggae and weed enthusiasts Dub Inc., NYHC veterans Sick of it All and whining fringe themed angst-peddlers Funeral for a Friend, OG ska innovator Derrick Morgan and Keith Morris rage valve side project OFF – they stood out over the majority of others we bore witness too.

This is undoubtedly due in part to vocalist Tony Foresta, who divides his time between Iron Reagan and thrash veterans Municipal Waste. Alongside having a solid dose of the stage presence necessary to make the crowd pay attention, he also comes across as a massive music nerd who genuinely loves the music he both builds on and pays homage too. This is something bought to the fore with Iron Reagan; while Municipal Waste bring more intricate song structures and guitar solos into every subsequent release, this project harks back to the D.R.I./The Accused worship of early Waste in the form of lo-fi, straight up headbangers. Their live appeal is also due in no small part to the tightness of the rest of the band, with a musical pedigree ranging from skate-thrashers A.N.S. to Cannabis Corpse.

This thankfully translates just as well to record – from the shouted chorus, murky production and breakneck speed of opener ‘A Dying World’ you know exactly where you stand, which is in about 1987, in the pit, spilling beer all over yourself. From then on it’s a full throttle onslaught of sound, with songs rarely breaking the two minute mark. ‘Dead With My Friends’ is by far the longest at nearly four minutes, but slots in perfectly as a chance for the band to demonstrate just how gut-crushingly heavy they can get. Follow up ‘No Sell’ makes up for such thrash sacrilege by lasting for a grand total of 14 seconds.

I feel like an album can be done a disservice by not picking out too many high points, but to be honest this one is a solid dose of carnage from start to finish. ‘Fuck The Neighbours’ is obviously destined to be a live classic, an obnoxiously enjoyable, 80s frat film-channelling slice of metal of the variety rarely seen this side of 1990. Title track ‘Crossover Ministry’ stands out by dint of the solid groove which it suddenly falls into in the midst of the chaos, reminding you of the band’s wider musical pedigree. Elsewhere, the maelstrom draws you into its centre and gives your aural cavities a serious seeing too. The final test of an album of this sort is, obviously, does it work as a suitable shot of adrenalin to make me want to go out skateboarding – a fairly irrefutable test, with the clear exemption of skateboard hating thrash luminaries Lunatics Without Skateboards. The answer? Too fucking right it does!