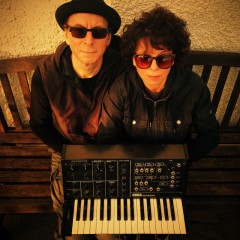 Revived after an unexpected synth-based shopping spree in New York earlier this year, Colin Newman (Wire) and Malka Spigel (Minimal Compact) have announced the return of their collaborative Immersion project. A nigh two decades on from 1999 release Low Impact, and with new-found sonic territories said to be inspired by the couple’s recent migration to Brighton, Analogue Creatures sees the long awaited fourth chapter in Immersion’s career to be immortalised on 10” vinyl via none other than Swim Records.

First cut ‘Organic Cities’ comes with analogue synth arpeggios in abundance. Seemingly structure-less and pleasantly meandering, the track also sees the first instance of electric guitar present on an Immersion record, with spatial, gloomy lines gliding skywards across ominous, geometric patterns. Check it out below along with a full track-listing.