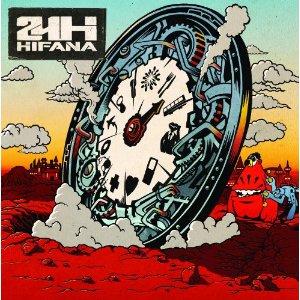 Openly billed as a concept album, the latest release from the Japanese breakbeat duo Hifana may well be the first of its kind in the perpetually underground genre. After all, the world of turntablism rarely considers unifying themes in an LP to be anything more than superfluous, and it’s hardly frequent as it is to come across a breakbeat album by one artist that isn’t indistinguishable from a compilation CD.

In 24H, the duo that so fluidly blend the old and the new, take their bag of traditional Japanese instrumental samples and beat-up MPCs to the notion of everyday living in a fast-paced contemporary city. Hailing from Tokyo, their hometown seems a more than adequate locale.

It begins with two unhesitant and pounding tracks that grow rapidly from a stereotypical university student’s morning-themed soundscape to a groggy bass wobbler. The growling bassline of Robot Namesake is the closest rendition of the noise I make every morning upon waking I’ve heard yet. Chinza Dopeness furthers the haze, as he yawns his way through a sleepy rap while machines cook breakfast and alarms are left running behind more bass assaults in ‘Wake Up’. Then, we progress through to ‘Work It’ and ‘Damn It Ringtone’, both of which are coherently evocative of that daily struggle in an epic slave-song meets Jet Set Radio urban beatfest, but from that point onwards I’m a little lost.

I attribute this to my knowledge of the Japanese language being extensive enough to cover ‘ohayo gozaimasu’ (‘good morning’) and that’s about it. UFO and Touring Tour could well be littered with post-modern poetry about rush-hour or standing in line at a bank machine for all I know. Rest assured, though the message may not reach you, the sonic brew is consistently boiling over throughout their scholarly follow-up to 2007’s Connect. If Flying Lotus created a cosmic opera with the intricate Cosmogramma then Hifana have likewise penned an unfinished urban symphony that’s forever on repeat for the daily downtown vernacular.