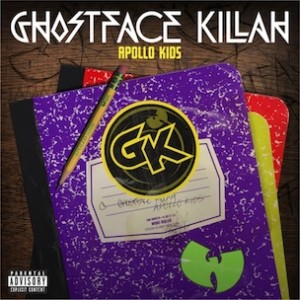 As if to make a mockery of the music press’ overzealous list making in recent years, Ghostface Killah has released new album Apollo Kids this week (December 21st), long after all major music publications have published their albums of the year. Far and away the most consistent Wu member, it’s no surprise that Apollo Kids packs a punch, but nobody could have expected this near flawless collection of classic Ghostface material. A November release date would have surely seen Apollo Kids ranking well in end of year polls, but this is typical of the casual approach Wu Tang seem to be taking to releasing albums these days. Besides, who’s going to tell Mr. Tony Starks that he needs to move his release date?

Lists aside, from the word go Apollo Kids adopts a no nonsense approach, free of skits and coming in at a lean 40 minutes in length. Yes, there are no instrumental filler tracks or martial arts outtakes to wade through this time, and I’m left wishing more Wu Tang albums had this sense of discipline. Guest spots come from the usual suspects, with Raekwon popping up on the last two tracks, while elsewhere the likes of GZA, Jim Jones, Black Thought and Busta Rhymes appear with some style. Busta in particular shines brightly on ‘Superstar’, always good for a guest spot yet rarely anything more.

Lead single ‘2getha Baby‘ seems to follow on from the bizarre production job on Wu Massacre’s single ‘Our Dreams‘, although the sharp transition between verse and soul sampling chorus seems to actually work here. Meanwhile the pick ‘n’ mix selection of producers includes Pete Rock on ‘How You Like Me Baby’, while the always brilliant Jake One steps behind the desk on album closer ‘Troublemakers’. For the most part the production borrows much from classic cuts of soul and funk, a style which Ghostface clearly feels comfortable rapping over.

Despite all the guest rappers and producers, though, it’s undoubtedly Ghostface’s album. Always lively and with a sharp turn of phrase, he effortlessly manages to light up each track with his own inimitable sense of humour. Seamlessly moving from Jimmy Neutron to hard drugs references, he has an extremely likeable personality that shines through even when rapping on a song called ‘Handcuffin’ Them Hoes’. Yup, Ghostface is back, and this is perhaps his best album since Supreme Clientele.