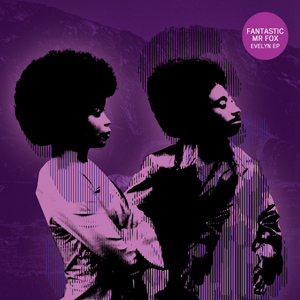 Fantastic Mr Fox has had a hell of year, gaining praise across the board as well as getting know to a wider audience through touring with the XX. With his Sketches EP still delivering the goods, the Wolverhampton-born producer has released Evelyn, a four track EP that showcases a more bouncy sound, ramping up the tempo and sounding more like his Jackal Youth alter-ego than ever before.

Understated beats coarse throughout the four tracks, yet the chopped vocals of opening track Evelyn instantly draw you in alongside the woodblock percussion, kicking off the EP in perfect vibesy fashion. Fool Me starts with a much more laid back introduction before getting into its stride moving into the delightfully steppy Over, with its throbbing fuzz of bassline and R&B tinged vocal samples. Sepia Song, the strongest track on the release, brings everything to a close with Kimbie-esque synths and an almost tropic drum beat at the end.

With the current state of electronic music coming out of the UK gaining strength with every passing day, it would be easy to fall down the sides without being noticed. With this release however, Fantastic Mr Fox has marked himself out as a star to watch. 2011 is definitely his time.