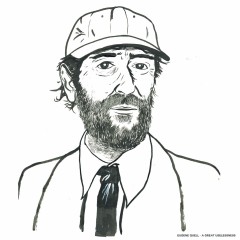 Here’s a Eugene Quell statement to think over: “I am making the most fun and unoriginal music I have ever made”. Logically, it’s an oxymoron – I mean, where’s the fun in unoriginality? We want new, right? Thankfully, forthcoming Quell release A Great Uselessness is a sharp lesson in how to juggle nostalgia and pastiche without tarnishing the memory. And there’s plenty of fun too.

Actually, A Great Uselessness isn’t devoid of originality at all – long-time fans of Quell brainchild Tobias Hayes (Meet Me in St Louis, Shoes and Socks Off) will recognise those unexpected chords straight from the off. Sure, there’s more than a cupful of nineties fuzz and grunge thrown in there (check the Francis/Deal duet during the Pixies-esque ‘Hell Presidente’), but there are also moments of charm and freshness alongside.

That none of the four songs break the three minute barrier says a lot about the focus of the EP – there’s no time for meandering here. Instead, it feels more like Hayes’ stream-of-thought layered over lo-fi slacker-rock; a lean eleven minutes with not an ounce of fat on it.

The adrenaline-soaked lead single, ‘That One Song’, is the shot in the arm we didn’t realise we needed, with a killer hook-line that comes from nowhere but stays for days. Only ‘And There Goes The Drugs’ slows the pace of the record – a bedroom jam that relies on subtlety instead of speed to level the record out.

On the eve of the first headline Eugene Quell show this week at The Old Blue Last, and with two solid EPs under his belt, Hayes is whetting the ol’ appetite somewhat. A debut LP can’t be far away, and if it’s anything like the material we’ve already heard, it’ll be worth the wait.

A Great Uselessness is due for release from July 7th via Sonic Anhedonic.