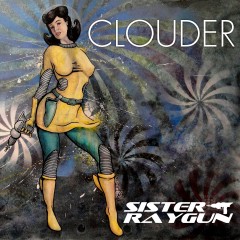 Heralded as “Brooklyn’s Bad Boys” after an intense tour of their 2012 LP Freakin’ Out The Squares, Clouder are back with more psych fuelled garage rock vibes. ‘Phantom Girl’ is the second instalment from the Brooklyn five-piece’s upcoming sophomore album Sister Raygun.

This track is three and a half minutes of hit repeat goodness. Lead singer Eric Gilstrap’s commanding baritone will chill you to the bone. This spooked vocal coupled with riotous psych via surf guitar riffing and a super tight rhythm section leaves ‘Phantom Girl’ dripping with 60’s rock ‘n roll authenticity. This track sounds far from dated, though. There’s no need for washed out soundscapes or indulgent episodes, Clouder keep it up tempo and exciting from start to finish.

If ‘Lost in Reverie’ and ‘Phantom Girl’ are anything to go by then Sister Raygun looks to be a strong contender for one of the hottest albums this year so far. It drops March 4th via Fleeting Youth Records.