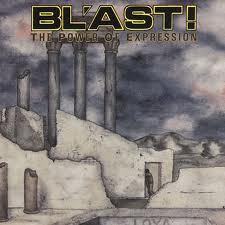 Following up last year’s well-received “Blood!” album, Southern Lord has now unleashed “The Expression of Power”, which couples debut album “The Power of Expression”, with an alternate session of its songs.

The original platter from these Santa Cruz hotheads surfaced in ’86 (on Greenworld/ Wishingwell) and is now cemented in Hardcore folklore as a solid gold Classic. So the key question is, do you really need this?

Well, for seasoned listeners “The Expression…” is not gonna alter your reverence of BL’AST! but will act as a double-barreled pummeling reminder of the high octane devastation these guys delivered in spades (like you’d actually forgotten!) And yeah, we all know they were in awe of BLACK FLAG, but there was so much more to BL’AST! Lest we forget they doggedly carried on playing off the wall Hardcore during the Eighties at a time most of their peers had broken up or moved on musically.

The demo cuts are raw and grainy, giving a rough edged slant to the songs, and captures the anger and explosive energy these dudes specialized in. Sounds mighty fine to these ragged ears! The pained and pulverising “Scream For Tomorrow” is the only unreleased song I noted, otherwise its just alternate takes on the songs that made the album.

Incidentally, I’m reviewing the tracks that appear on the CD version, but get this – the vinyl release is spread across three records, and includes another unreleased session. Even the most hardened fans will surely be Bl’asted out of their minds after sitting thru all six sides!

I know time waits (for no-one) but with BL’AST! back playing, and still totally nailing it by all accounts, it’s surely high time they hit these shores to destroy us… here’s hoping!