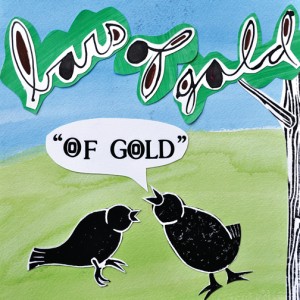 From the ashes of underground music heroes Bear Vs Shark rises another musical force to be reckoned with in the form of Bars of Gold. Many a fan of superior rock music shed a tear when Bear Vs Shark announced they were disbanding several years back but now former members Marc Paffi and Brandon Moss have created Bars of Gold and their debut release should certainly go some way to appeasing those who were heartbroken. Paffi’s hearty yelp is unmistakable and whilst ‘Of Gold’ ventures further into indie-rock territory, with nods at the likes of Modest Mouse, this band is definitely a natural progression from BvS.

Now, before I become one of those detestable people who bangs on about previous incarnations of a band in a review of their present musical outfit, I’ll move on to the matter in hand. The stand-out track on this record is ‘Heaven Has A Heater’ which features Paffi’s vocals at their heart-wrenching best. Melodic yet powerful and repeatedly veering towards breaking point, the resulting sound is exhilarating, especially when propelled by carefully balanced instrumentals that build perfectly between the track’s most heady climactic points. Although this is probably the best track on the album, the others are pretty much equally as exciting. What makes Bars of Gold special is their ability to really explore dynamics where other rock bands would just play LOUD. It makes the fuller, louder parts feel so much weightier when preceded by an almost-whispered piece, backed by a gently pulsating drumbeat. But other bands take note – it’s not just loud and quiet that exist in the realm of dynamics. There is a veritable rainbow of sounds that are possible and Bars of Gold really tap into this through their use of layering instruments and vocals in different permutations. Another aspect of the band’s brilliance comes in their constant experimentation with tempo and rhythm. I’d be willing to bet that a click-track was not their favourite tool in the studio. This makes the music flow but with an ever-present rippling undercurrent of unpredictable excitement.

Bars of Gold are good. Believe.