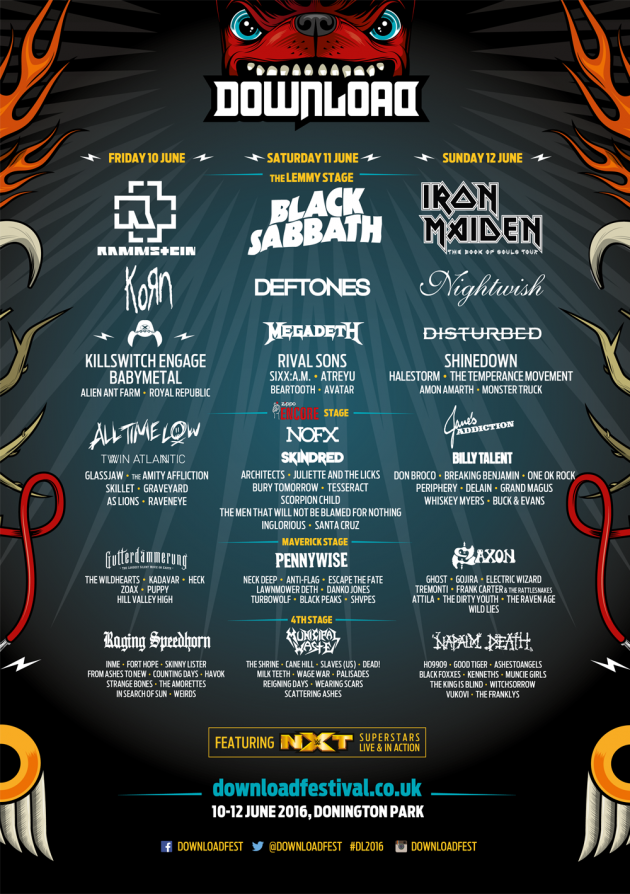 Yes, it’s nearly that time of the year again; when, for three days, Donington Park gets very, VERY loud! Crossfire will be there, and assuming that we once again survive a weekend of consuming half our body weight in beer and crisps, we’ll post a review afterwards. You’re probably already salivating at the thought of seeing big guns like Rammstein and Iron Maiden, not to mention what looks to be the final UK performance from metal gods Black Sabbath, but how about the lesser-known bands on the bill? Here’s our guide to some of the best.

Now that Motorhead are – for sadly obvious reasons – no longer on the bill, who’s gonna bring the rock n’ roll swagger to Download 2016? Swedish quartet Royal Republic are armed with jagged, insistent garage rock riffs, earworm choruses and a delightfully deranged frontman in Adam Grahn. You’d be well advised to surrender, and let them shake you out of your warm lager-induced hangover.

Last year’s ‘Blossom’ debut saw Frank Carter back to his furious best; imagine a British Queens Of The Stone Age with a hardcore edge and plenty of sarcastic wit. Given his (and his Rattlesnakes’) reputation for inciting crowd chaos with feral performances, this one should be unmissable.

Listening to these guys is the musical equivalent of having a nervous breakdown in the middle of a 20-man Shaolin Kung Fu battle royale – but much more fun, and only slightly less dangerous. They’re not afraid to get involved in their own moshpits, and their twisted hardcore attack should have fans of Converge, Gallows and Pulled Apart By Horses salivating with glee.

If Sunday morning sees you feeling rather the worse for wear, and not ready for yet another barrage of sledgehammer riffs, then go and check out Muncie Girls. In fact, go and check them out whatever your mental/physical state, because their gloriously melodic yet rough-edged punk rock tunes really deserve as many ears as possible.

This Bristol quartet is arguably one of the UK’s most inventive bands, mixing up hard rock, psychedelia, punk, and electronica in an unpredictable and brilliantly explosive way. Excellent second album ‘Two Hands’ was released last year; give it a spin, and be equally thrilled and revitalised.

6. THE MEN THAT WILL NOT BE BLAMED FOR NOTHING (Zippo Encore Stage, Saturday)

Every good festival needs a wild card of sorts, and it’s safe to say that Download hasn’t seen many bands like The Men That… before. Self-described as “putting the punk into steampunk”, if the likes of ‘The Gin Song’ don’t get you singing along with a stupid grin plastered across your face, then you are a po-faced bastard and we here at Crossfire are laughing at YOU.

Sad that Slayer aren’t playing this year? Cheer up, because Colorado’s Havok are flying the flag for heads-down, no-nonsense thrash – and are doing a fine job of it. You know the deal, razor-sharp riffing, breakneck speed, circle pits… these guys deliver the goods.

More quality West Country punk rock, this time with an awesome melodic grunge twist that recalls Sonic Youth at their most direct. Are the guitarists trying to play their instruments or destroy them? Sometimes it’s hard to tell, but the band hold it all together brilliantly. Grow your hair out and get ready to fucking bounce.

Worst band name of the festival? Quite possibly, but it’s harder to argue with Puppy’s knack for languid, Weezer-esque pop-rock tunes. Don’t be surprised if you find yourself humming the likes of ‘Forever’ on your journey home.

Damn, is this the year of the South-West Takeover? Devon’s Black Foxxes play “ragged noise”, apparently, and there’s certainly no end of tortured screams and squalling guitars on the likes of ‘River’ and ‘Husk’. They also have a calmer, melancholic side, though, and it’s a combination which should endear them to fans of bands like Deftones and Brand New to no end.