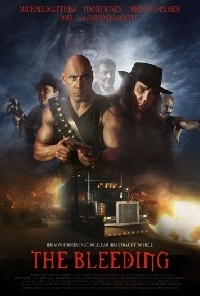 The Bleeding is directed by world-renowned stuntman Charlie Picerni, but after viewing this one, here is hoping that he isn’t giving up his days of jumping off buildings as a stuntman as it is the product of some disastrous decisions made by everyone involved.

The first point of disaster was the script. The plot reads on paper to be halfway decent; ex-Army Ranger Shawn Black (Michael Matthias) searches for the killer of his parents discovers a family of vampires in a factory-turned-nightclub and must kill them as revenge. Sounds simple enough and with the opening car chase and gunfire, hopes were incredibly high; a touch of The Fast and The Furious, with an added bonus vampire attack. However, after this scene, which is actually future along in the narrative, the film cuts through the part where his family is killed and heads straight to revenge. It is through a voice over from the main protagonist that we are told about his life history, his parents and what he plans on doing about it.

The second mistake was calling upon Vinnie Jones to be Cain, the king of the vampire family. Jones is a hard man and is more than capable of carrying his own in films but as a vampire, he is just unable to pull it off. His death scene especially is one of the most inadequate you will have ever seen. Besides Vinnie Jones, stars of the film include newcomer Michael Matthias who could give Vin Diesel a run for his money, DMX, and Michael Madsen as drunken Father Roy, none of which are very dramatic.

Thirdly, the violence and fighting sequences are unbelievably phoney and this can be seen easily. When Black is lying on the floor getting kicked by some other fellas he actually looks up with no expression and moments later jumps up as if never been kicked. When Tag, played by rapper DMX is tortured, his screams were as scary as a young girls. Then there is the moment one individual is getting punched yet the camera reverts to someone else each and every time a punch is heard being made. What is the point of the punch, if it cannot be seen?

Lastly, the ending couldn’t have been more disappointing. After spending the past 70 minutes watching someone hunt down a clan of vampires to seek out their King and kill it, the lead protagonist manages to kill him in about two minutes; it’s the worst death of a vampire I’ve ever seen.

If you are a vampire crazed movie fanatic of features like Dusk till Dawn and the Lost Boys, then this one will be a huge disappointment. No all-star cast, no sufficient action or horror, no entertaining narrative and no point in watching.