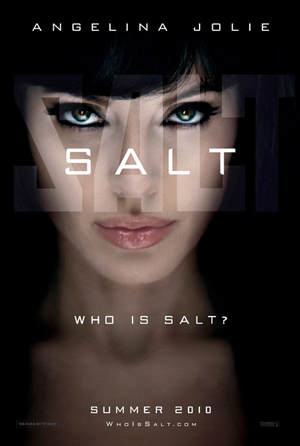 Not that any more proof should be necessary that Angelina Jolie is the go to girl when a movie demands that it’s lead actress not only be so staggeringly attractive, you can’t look at her directly for fear of you’re brain shutting down but also be able to axe kick a British terrorist master mind off the wing of a moving plane with a steely grace; but Salt really does solidify her reputation as just that women. Be it bending bullets and obeying the orders of an ancient piece of weaving equipment in Wanted or boobing her way through the boob Tomb Raider series of boobs with boobs….she really is in a league of her own as a female action star in Hollywood films these days, standing shoulder to shoulder with big name male stars of the genre.

Salt is the sort of action movie that can be expected in these post-Jason Bourne years, it exists in a world where spies are not all about the gadgets ala Mr. Bond, by more about being furiously unstoppable in their resilience, knowledge, adaptability and general ass-kicking-ability. Originally, Tom Cruise was envisioned for the character, but turned the role down fearing it echoed too similarly to his part of Ethan Hunt in the Mission Impossible series. Thus, Edward becomes Evelyn, and Cruise becomes Jolie, a move which, for all intents and purposes, was a very wise one.

The film follows Evelyn Salt, a highly trained CIA agent accused of being a Russian sleeper agent activated to kill the president, so, she goes on the run from her own people and tries desperately to locate her husband, who she fears is in a bit of a pickle.

So far, so fairly standard. The plot however takes a turn for the more interesting when it’s revelled she may actually really be a Russian sleeper agent activated to kill the president and her characters motives become increasingly tricky to guess as the film plays out, is she a hero? Is she a villain? Or is she something in between? It’s not impossible to guess how the piece is going to play out by the end, but it’s nice to see a film where every once in a while it takes a detour down some character avenues you weren’t expecting it to wander.

There’s some pretty cool set pieces, especially a sequence where Salt, whilst in the back of a police car, makes her escape by tasering the driver and electrocuting him to go faster, bringing a whole new meaning to the phrase “back seat driver”. However, the plot is startlingly ridiculous once you start to think about it and other than the aforementioned sequence, there aren’t that many blood-pumping action moments. Not that a movie should rely on them…that can often be worse than having an underwhelming lack of the things (I’m looking at you Quantum of Solace…hang your head in shame) but, it felt as though it was missing a bit of “oomph”

From the ending you can see it’s wrangling for a franchise, but I don’t know how many more movies they could really get out of the films core concept, Salt pretty much does everything it was intended to do Essentially it’s The Bourne Identity: Lighter Version…..and Matt Damon suddenly has fantastic boobs and lips.