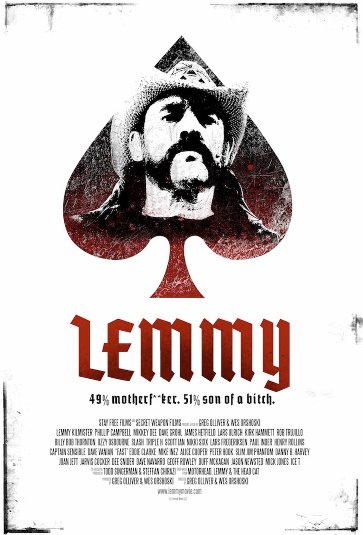 Welcome to the World of Lemmy Kilmister, the God of all that is Rock and Metal, the coolest bloke in rock’n’roll, the most under the influence and most straight talking and caring rock star we are lucky to still see sat drinking a Jack Daniels and Coke at the Rainbow in LA playing a video games on a weekly basis. Finally someone, somewhere decided to make a film about him so we went along to the UK premiere at the NFT on October 23rd to have a look at what’s coming up.

This documentary put together by Greg Olliver and Wes Orshoski took 3 years to make and covers the life and times of Motörhead’s most infamous front man starting from the living room of the man himself. It’s very much like a bomb site in there, paperwork everywhere, memorabilia piled up from the door to the walls, even the bin couldn’t be spotted by the directors. Lemmy has lived in this same apartment for years, a spot where he collects his favourite Rickenbacker bass guitars and Marshall Superbass II amplifiers amongst tonnes of gifts he’s received on tours that stack up all over the place. His apartment also houses a huge amount of Nazi memorabilia; cutlasses, knives, swords, bullets, outfits and quite bizarre in the way they are all piled up in rooms – in his own words it’s pretty much a ‘museum’ in there.

The film delves into his history of watching the Beatles, being the front man of psychedelic legends Hawkwind, discussing the uppers and downers of the band’s rise to fame from the underground in detail covering the pills, the powders, the tabs and the reasons why Lemmy was left to fend for himself after being hauled into jail for carrying illegal drugs whilst on tour through the borders of Canada. You also get to see the family side of his life. His son Paul talks of the reasons why Lemmy has never married, his past relationship with a girl who died from a heroin overdose and his upbringing around the chaotic lifestyle of a touring rock star. I think one of the best quotes of the film was based around this subject when asked what his preferences were to getting blown and playing in Motörhead, he answers ‘sex can last at most about 30 minutes and Rock and Roll about an hour and a half…’ – he would choose the latter hands down.

Women still throw themselves at the man in his sixties to this very day. The directors of this movie spend time in the van with Motörhead on tour to find out what goes down and also attend a show where Lemmy guests with Metallica, one of the many great rock bands who appear in this movie to big up Stoke’s biggest star. Interviews from other famous faces include Slash, Scott Ian from Anthrax, Ozzy Osbourne, Geoff Rowley from Flip Skateboards, Dave Grohl and most surprisingly Jarvis Cocker, Mick Jones and New Order’s Peter Hook amongst others. They all praise the Legend as a man with morals and as one of the most unique rock and roll stars still living the life.

Overall, the film does cover a lot of facts already known from the various interviews he has done since he has been in the game but also offers a reminder that Britain’s stars of the past laid foundations for rock music all over the planet when they broke. Lemmy Kilmister will go down as one of the main dudes in the Rock and Rock Hall Of Fame and that’s why you should definitely have this on your to do list when it is released to cinema’s in December with a DVD release scheduled for January 24, don’t miss it.