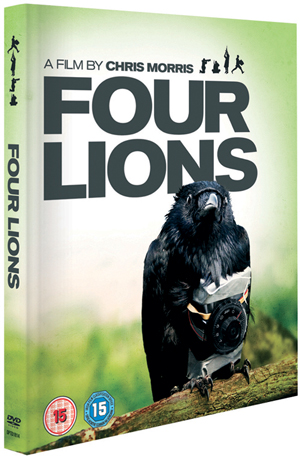 Four Lions, written and directed by Chris Morris, has been criticised for not having the kind of jaw-wrenching satirical bite that The Day Today and Brass Eye had; shows, in which he also appeared, that helped build the image of Morris as an elusive ‘media terrorist’. But together with Peep Show writers Jesse Armstrong and Sam Bain, Morris has pocketed the brash finger wagging of previous work to make a more story-driven film about British wannabe terrorists. On the surface this seems too simple for someone of Morris’ reputation. But this is exactly the point, and the film’s greatest satirical achievement. Morris hasn’t just stepped behind the camera – he’s taken the camera out of view as well.

Thanks to Morris’ notoriety, the film- not only threatening an explosive end within the plot- also hums with the constant threat of a contextual pullback and a satirical wink, of Morris himself entering the frame and bellowing over the authorial shield of an immaculate suit. But the biggest, and bravest, shock of the film is that it never comes. The film is unnervingly, and necessarily, ‘normal’, spooking the familiar narrational haunts of Western storytelling and challenging cinema’s capacity to accomodate the comical humanising of the perennially demonised.

Focussing on a group of young British Muslim men during their often hilariously hazy plotting of a terrorist attack, the film fits the conventional coming-of-age ‘buddy’ comedy mould of a bunch of bantering, bickering lads searching for direction in life, a route that, less conventionally, zig zags from a training camp in Pakistan to a peroxide-stuffed garage to a London charity fun run. And that’s it. That’s the film. It is not, as a Newsnight Review panelist suggested, trying to trivialise the devastatingly tragic impact of terrorist acts. It’s more complicatedly simple than that, offering moral, ethical and thematic ambiguity through deceptive simplicity that doesn’t just challenge depictions of evil, but also slyly prods the medium that helps cultivate these depictions. Morris et al are exploring the psychology of those plotting to attack a culture that’s bred them. A culture that they, quite contradictorily at times, appear to enjoy.

Consequently their vague plans become a metaphor for the disillusionment of Western youth, of striving beyond immediate humble surroundings to something better. But as the terrorist plotting develops into more serious, disquieting specifics, doubts begin to rupture their resolve and the group literally struggle with the burden of their explosive tools, weighing them down into a farcically plodding galavant of tragic uncertainty. With this he exposes the inherent farce of human nature, that even the most distressing and destructive aspects of humanity can – and should – be made amusing.  Even policemen, representations of western authority – helmets almost slipping, weaponry timidly handled- are depicted as squabbling fools as ridiculously costumed as the runners of the marathon they’re overseeing during the film’s most tonally challenging final scenes. Everything gets eventually caught in a current of compassion that churns the film’s world into an inseparable mess of tragedy and farce, forcing you to laugh and gasp at the same time.

That the film has trickled into cinemas and drained away with minimal fuss is a notable dwelling point; Morris has made a film that avoids the stigma a controversial film would acquire that would make people approach it with caution, and allowed it to almost exist as a conventionally plotted comedy drama. In doing so, Four Lions has caused as much cultural damage as the film’s ‘heroes’; being satirically successful through being mostly unremarkable. It’s been criticised for it’s broadness, for not being challenging enough, for being quite ‘safe’. But it should be praised for this. The broader it is, the more focused the point. This film has to not only be seen and enjoyed for it’s low-key controversy, but also celebrated through unperturbed, uneventful tolerance. So uneventful is it that the DVD doesn’t even have a synopsis on the back, and extras are scarce but interesting. Deleted scenes are woven into the menus and documentaries illustrating the level of research conducted into the psychology of disillusioned British Muslims are interesting, but there should have been more. This shouldn’t detract from what is a fantastically challenging film, in ways more subtle than anything Morris has ever done.

Four Lions is out now on DVD and Blu Ray. See what the lack of fuss is about.