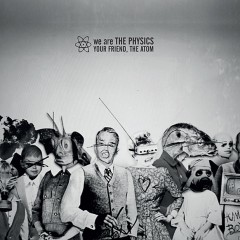 We Are The Physics
Your Friend, The Atom
[This Is Fake DIY Records]

We are the Physics describe their sound as ‘Mutant science punk rock’ and, to be honest, I would’ve put them in a similar category myself. The sound is a vivid mix of genres which create a very exciting and moreish vibe about it.

It’s hard to explain. Like hipsters that found themselves in a studio after mainlining cocaine. The band explain their stance themselves: “Making a fairly derivative sound more interesting.” . Essentially they sound like an indie band (with the temperament of Battles) who have spent a lot of time listening to bands like At the Drive-In. The end result takes mundane ‘indie’ and kicks it into the curb.

‘Your Friend, The Atom’ is like the soundings of a group of particle physicists working on the Hadron Collider whilst writing some epic music. The album maintains an obvious, and somewhat expected Scientific feel about it. Robotic sounds and weird electronic tinkering is scattered across the entire album, even shouting science jargon like “Subject vs. Subject”!

The upbeat tunes and strong bass-lines are impressive, and the vocals match in pace. With standout tracks on the album, the heroic and aptly named intro ‘Go Go Nucleo -> For Science‘ and the more relaxed, but incredibly catchy ‘There Is No Cure For The Common Cold So Don’t Expect A Cure For Cancer’; ‘Your Friend, The Atom’ is an excellent scientific discovery.