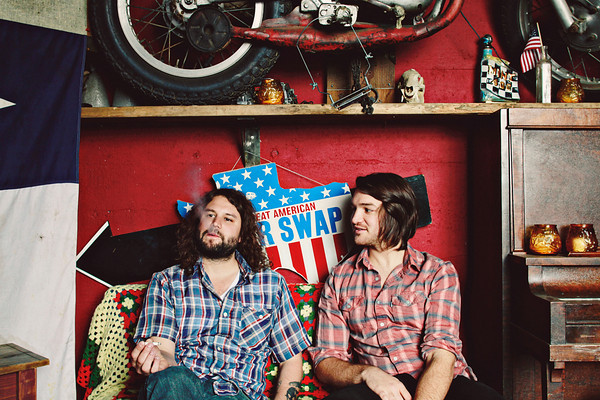 Seattle duo Joel Schneider & Ethan Jacobsen who make up the explosive blues-rock duo My Goodness have just left the UK after a 2 week stint touring sold out venues. The pair thumped out an incredible jam at London’s Dingwalls venue this month that resulted in most people queuing for tee shirts and considering they were for a support act, that’s extremely rare. Getting to the front of this queue for some words before most, Sophie Eggleton spoke to guitarist/singer Joel Schneider about their musical quest looking back on a tour that they will never forget.

You’ve just come off UK leg with We Are Augustines. How was that experience? Do you think your bands married well together sonically?

It was an incredible experience. We had toured once before with We Are Augustines in the States and were already good friends before this tour. It made things nice and comfortable once we got over to the UK, especially since we were sharing a bus. I think if you listened to both of our records you might not think it the ideal sonic pairing for a tour but if you saw one of the gigs you would think differently. Both our bands play with an incredible amount of heart and passion that comes through in our live shows. In that way I think it was a great pairing for a tour.

Do you write your songs from personal experience or did you make more broad statements?

I definitely write from experiences. I like to tell a story with my songs. It can be my own story or someone else’s as long as it means something to me. I’ve written a lot of our songs about the ins and outs of trying to be in a relationship in your early 20’s. I’ve pulled from my own experiences and also those of close friends of mine. I use music as a way to get things off my chest that I feel the need to put out in the open. It’s kind of my own little source of personal therapy. I find it quite effective. I grew up in a strict religious environment where “secular” music was looked down upon and disallowed in the house. When I started writing my own music it became my escape, a way for me to say how I felt without as much of the backlash. I think I’ve continued on into adulthood with that same outlook and writing style.

How do you think the Seattle area has influenced you? Is it still as vital and vibrant as it was in the 90’s do you think?

It has definitely influenced me. I’ve always liked my music nice and loud, even as a kid. Growing up in Seattle during the 90’s we were surrounded by Seattle music. You couldn’t really turn on a rock station without hearing Seattle bands like Nirvana, Pearl Jam, Soundgarden on constant rotation. I used to hide a little FM radio under my pillow and listen to the local rock station until the early hours of the morning. My teachers always wondered why I was so exhausted at school the next day. Those bands definitely initiated my love for music. In my high school years (early 00’s), There was a great hardcore scene in the city. Bands like Blood Brothers, Harkonen, Botch used to play all ages shows on a monthly basis. I would try and go to every one. I think our music is a blend of all this music we grew up on and the classic blues, soul, and country we have come to love. We still definitely have a louder is better attitude though.

Music in Seattle will always be a vital part of the city and everyday life. I would say the heavier scene in the city has lacked focus for a while but things are now changing. A couple record labels are coming up and really creating a community of heavier bands in the city that there has not been in a while. It might not be quite where it was in the early 90’s but its heading in the right direction again. Either way it is a fantastic town for music.

Many of the reviews and articles I have read about you reference Jack White. How do you feel about that comparison? Has his work informed your sound do you think?

I have always been a big fan of Jack White’s work. I think a lot of the comparisons come from the fact that we are a two piece band with blues influences in our music. I don’t think his work has specifically had any influence on our sound, although I have always loved that in his live shows he’s never been afraid to let loose and lose himself in the music. To me that’s what it’s all about. I would say if there were any similarities that would be the biggest.

What records were you listening to at the time of writing or tracking the album?

There was a lot of Stones, Dylan, and Junior Kimbrough in my playlist around that time. Also was listening to Seattle bands Helms Alee and Murder City Devils a bunch.

Everything on your album was recorded to tape, with no effects or digital enhancing. Is it essential to you that it sounds real and raw and matches your live performances?

Yes, that was definitely the idea we had in deciding to do our record that way. We wanted our live show to transfer over to our record in the most organic and warm way possible.

Because you have chosen not to use the likes of pro tools, did you put in a lot of practice before recording? Was in nerve-wracking every-time the record buttons was pressed? (Did it take many takes)

It actually wasn’t all that bad at all. We did the whole record in a week. The only part that really took a lot of concentration was watching our tempo; making sure we stayed in the pocket without speeding up or slowing down too much.

Before you formed My Goodness you were both in other bands. What sounds were you making with them, and why didn’t they fulfill you enough?

I’m actually still playing in a band called Absolute Monarchs when I’m back home. It’s a far heavier band and is still a blast to play in. The difference is it’s far more structured and rigid than My Goodness. With My Goodness I feel like I can go in whatever direction I want with a song. I can fully express myself musically which is a very liberating feeling.

What would you/do you do when you are not playing music. Are you working other jobs simultaneously like many other bands are?

Ethan stays at a friend’s house when he is home. I’m still trying to keep an apartment in the city so I bartend a few days a week at a venue in town called Neumos.

The story goes that you closed a bar one night in early 2010 and went for a jam in a nearby practice space. What the musical chemistry instant? Was the sound you made together that night indicative of what My Goodness would end up producing?

It was. I think we ended up structuring the majority of “C’mon Doll” and “In the Sun” in that first session. I had already had a few basic ideas for songs formulated on acoustic at home prior to that night. When I started working through them with Ethan it came together pretty seamlessly.

When was it clear that this was the formula that would allow you to tour other areas of the world?

Honestly not until recently. We made some unfortunate decisions on who we decided to work with when we first started out. For a while I felt like because of that we weren’t going to ever get out of Seattle. Just in the last few months we were able to free ourselves of that situation. It’s been a breath of fresh air. Things have been moving fast and in the right direction since. 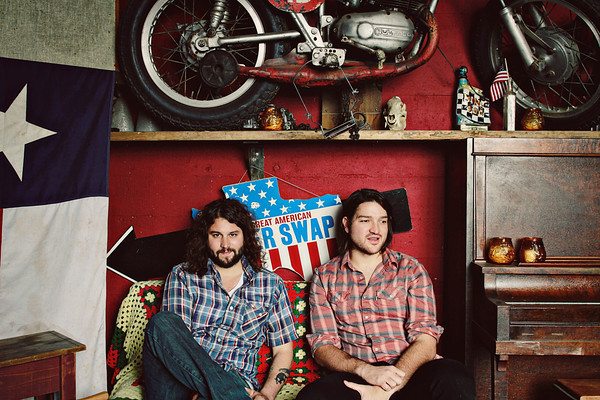 Can you tell our readers a bit about your debut single C’mon Doll. Where was it written, what spurred the lyrics, what do you want it to give to the listeners?

I wrote the majority of C’mon Doll at home on an acoustic guitar. I was having a lot of repeating disagreements with the girl I was in a relationship with at the time and it was starting to feel really redundant. Like the same shit over and over. The song is basically me saying “Hey! Let’s stop acting like idiots and let bygones be bygones – forget it and work shit out” It’s really just me trying to put things in perspective. A lot of times people let small issues become way bigger problems. Most of the time it’s completely unnecessary and caused by pure emotion and not a lot of thinking. I’m as guilty as the next person of doing this.

Are you constantly writing or do you wait to do it intensively? Have you already begun thinking about the next album?

I am always writing, although sometimes the creative juices are flowing a little more than at other times. Recently it has been going great. We have the majority of a second record already written and are quite excited about it. We’ve been playing a few of the new songs out at shows and they seem to be going over well.

I heard that Dave Grohl did the last Foo Fighters record to tape. I’d be pretty intrigued by that collabo.

Recently played on your ipod?

A packed house in the back bar of the Bon Temp Roulette, New Orleans. You can only cram about 150 people back there if you’re lucky. It’s my happy place and I recently had a dream about it. I think we can make it happen at some point.

Staying in bed all day.

-Keep on having fun playing music. Album is coming out in the UK by the end of the year so we will definitely be heading back over there to tour. We can’t wait!

Watch the making of the C’Mon Doll video here and download the single for FREE from this soundcloud link. You can find them on Facebook here. 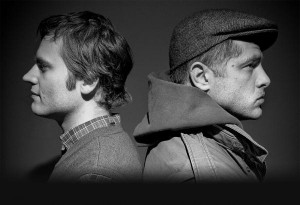 Last November we tipped a new band called Augustines from Brooklyn as ones to watch in 2011. The bad news is that they had to change their name due other bands with the same letters, but the good news is that they are back as We Are Augustines and visiting the UK in March to support The Boxer Rebellion in the following venues listed below. Watch their EPK below and find them online here.