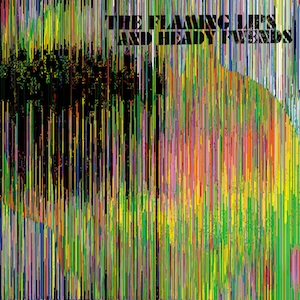 It’s been a while since The Flaming Lips seemed absolutely vital. Probably the last time they could have been considered essential listening was back when Yoshimi was battling those evil robots. Some might argue that The Soft Bulletin was the high point, and others might even dig further back to Clouds Taste Metallic or …Satellite Heart. Whatever, it’s fair to say that Coyne and chums have been a little off the boil of late. Embryonic was a move towards a filthier, darker, more overdriven sound, and although it might not have been a grand success, it did seem as if The Lips were getting back on track.

Heady Fwends is probably not the best release by which to judge the state of The Flaming Lips’ collective consciousness, it is after all yet another one of those little diversions that Wayne Coyne seems to like taking his band on.

Discounting Wayne’s own distractions (twitter seems to be taking up a fair amount of his time) the band itself seems to have been content with messing about over the years. There was the Boombox Experiments, the 4xCD lunacy of Zaireeka, the Gummy Skull (with USB inside), and their foray into the world of covers courtesy of their take on Dark Side Of The Moon.

Indeed it is that particular release that rather sets the precedent for Heady Fwends. It too was released for Record Store Day initially, and it featured an occasional guest spot for the likes of Henry Rollins. Taking the guest spot to its logical conclusion, Heady Fwends is an album created by the collaborative efforts of The Lips and whoever they could convince to take part. The overall impression that Heady Fwends gives is that it’s more of a knockabout than a serious attempt at an album. If it’s taken in that spirit, then overall it’s pretty good fun, if slightly flawed.

It all kicks off in suitably wonky fashion with Ke$ha’s effort, 2012 (You Must Be Upgraded) which sounds like Yeah Yeah Yeah’s channelling early Ween – only not quite as good. There are other let downs along the way, the collaboration with Lightning Bolt I’m Working At NASA On Acid should have been a mind bending collision of noise, but when they hit the chaos section it all seems a bit contrived and a missed opportunity. Meanwhile Supermoon Made Me Want To Pee (with Prefuse 73) just seems like an exercise in boredom at the mixing desk. Helping The Retarded To Know God (with Edward Sharpe and The Magnetic Zeros) is a bit of a dawdle too with could do with a hefty edit. Not that there aren’t some fine flourishes to be found in the vocal melodies or the heavenly tacked on coda, but it drags quite dramatically.

There are some high points too however (as an aside, Coyne seems at pains to explain just how high/fucked up constantly). Children Of The Moon takes Tame Impala aboard the honking mothership from Close Encounters for a woozy and quite wonderful rustic jam. That Ain’t My Trip (with My Morning Jacket’s Jim James) sounds like an outtake from Embryonic, and is a suitably over-driven bundle through choral chants and earsplitting amp terrorism. The funereal space-scream of Is Bowie Dying? occupies similar territory, combining noise a Twin-Peaks guitar twang and existential dread. Nick Cave turns up and puts in an archetypal Cave performance, for some reason he sounds like an intensely sarcastic David Thomas at times, but it works. Finally, the epic sprawl of the cover of First Time Ever I Saw Your Face is genuinely affecting at times, with the unpleasantness that kicked off between Coyne and Erykah Badu in the wake of that video unable to cast a shadow over it.

So plenty to like, but also a fair few missed opportunities. Hopefully The Flaming Lips will return to concentrating on making music without the distraction of their Fwends for the foreseeable future. The world needs another vital Lips album.