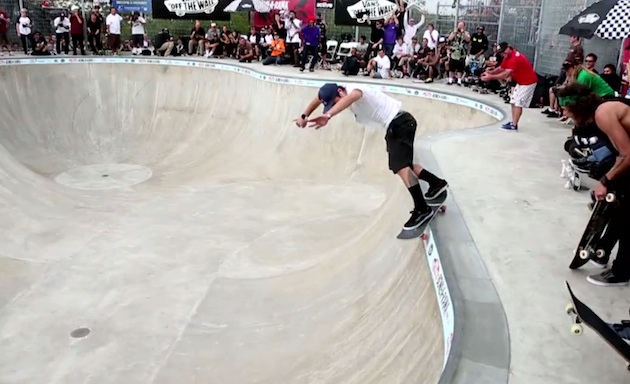 The annual Vans Bowl-A-Rama is back this weekend at Bondi Beach in Sydney, Australia and riders have started preparing for the onslaught of this big day. Watch this footage of Andrew Langi, Bucky Lasek, Omar Hassan, Jeff Grosso and more as they practice in the lead up to the event.

Look out for updates at http://vans.com/bowlarama and click here for a full feature on last year’s event.

February 20th 2010 was the date set for the 5th annual Bondi Bowlarama. For the uninitiated, the Bowlarama is a World Cup of Skateboarding competition held at the skatepark next to Bondi Beach in Sydney, one of the most famous beaches in the world. These events are always good as they attract a lot of the best pro, amateur and master skateboarders in the world. This year was no different with entrants from all over Australia, Europe and America.

There are also a number of sideshow events throughout the week in the lead up to the competition on the Saturday. All in all, it makes for a perfect long weekend away from the drudgery of real life and work.

Anyhow, you’re not reading this to learn how much beer I drank in the sun, you reading this to learn about who ripped and who won.I’m gonna jump ahead a bit and just say for me, three of the main stars of the weekend. First of all, Grant Taylor, is an absolute beast, he appeared on the Friday and was ripping around the bowl like a hyperactive child just given a can of coke. His frontside ollies rival Jason Jesse and he was floating them sky high in the deep, matched with long and speedy grinds. The second, who I only saw on the day of the comp was young ripper Ben Raybourn from Texas, riding for 1031. He turned up and killed it with a mixture of old and new. Only Grosso was doing better sweepers than him on the day, but then Grosso wasn’t also pulling BS 360 airs to rock n roll out of nowhere in the shallow. Thirdly and the guy that really does deserve a lot of recognition was Sergie Ventura. He was constantly present all weekend skating and encouraging people and MCing on the day after knocking himself out in the square corner on the Friday and earning a head full of stitches.

Anyhow, onto a more chronological description of the days events, first up was the Masters comp. Every year I have attended Bowlarama there have been a mixture of legendary pros in attendance to compete, mixed in with a handful of unknown, lifetime deep rippers from Australia. This year saw the best turn out so far for the legends, I managed to be stood listening to Caballero and Lance chat about whether or not they could do sweepers after we watched Grosso do one in his heats. That doesn’t happen twice in a lifetime, although there is always next year.

The Masters final had a strong showing with everyone skating hard. Lance Mountain was unfortunately sidelined after a back issue in his introductory run. It was disappointing, as he was ripping prior to this with all his trademark moves, no one does a sad plant like Mountain.

‘Grosso, Grosso, Grosso‘. There are not many words to do his skating justice, to see is to believe as they say. He was grinding and sliding every inch of the coping and stalling his inverts. I guess you could say he is like a caveman on a skateboard, and I mean that in the best possible way. One of the funniest points of the weekend was watching Grosso announce he was having a cigarette break, only to go and pop in some nicorette gum.

Local Mick Mulhall was ripping with big airs and a deep bag of liptricks to get him into third place. Pat Ngoho was ripping after his win the previous week in New Zealand. He gets better every year it seems and this year was no different. His manual around the platform of the square corner was a highlight to earn him a deserved second place.

For the third year running, Steve Caballero won. As ever he was the well rounded professional with a combination of airs, inverts and lip tricks to put him into first place. There’s not many new things that can be written about him, but after more than 30 years in the pro game, he is still as passionate and fun to watch as he ever was. I’m hoping to see him in the same place next year.

The pro event has always had a great turn out. This year was no different, what is always amazing is the mixture of skateboarders you get. There are vert pros, bowl skaters, the skaters you never heard of apart from in the WCSK8 contest listings and a heap of Australians.

Notable skaters this year that didn’t make the final include the aforementioned Taylor and Raybourne as well the two young vert upstarts, REAL’s Alex Perelson and the UK’s Sam Beckett. Both cruised in their heats and didn’t really show all that they were capable of. Sam proved that he has style for miles and the look of a skater with far more years under his belt than you’d imagine. Alex taught the tight square corner a lesson with a bs 50-50 270 in.

Anyhow, onto the finals, I think that this year was the first year where everyone that got through to the finals were padded up. Previous years, various bowl skaters opting to go sans pads have made it through. This year was a different story and the skating was so gnarly that it was probably wise.

This year, the sponsors, including Vans, had put up over $40,000 in prize money, so the skaters were feeling hungry to say the least. The 10 man finals started off with two introductory runs each and then straight into a jam format or a hectic snake session as it were. At times, it was 2 or 3 skaters at once, in a relatively small bowl, so you had to make every run count. It was unfortunately at this point that Renton Millar managed to smash himself into the flat bottom after slipping out of a 540. He had been killing it all day and it was a shame to see the current World champion bow out early to injury. He was fine later thankfully and pulled in a respectable 10th.

9th, 8th and 7th went to Rion Lindermann, Josh Borden and Juergen Horrwarth. All of whom pulled out some stylish and respectable runs, but were edged out in the snake session for better or worse.

6th place went to Melbourne local RJ Barbaro, who stayed on for some of the longest runs and the highest airs. His placing was pretty good given his experience last year. From maced to placed, shall we say. 4th and 5th went to previous top 3 placers Omar Hassan and Rune Glifberg, both did well and showed why they’re some of the biggest names, but just couldn’t put it together to break the top 3. This is the ridiculous bit also, in previous years, both of them would have been contenders to win.

This brings us to the top 3. Coming in at 3rd was Flip’s Bob Burnquist with a heap of switch crazyness and manhandling of the coping. After seeing his Flip part, you might think that Bob is some superhuman that can skate everything, well he is, but you see him work for it and that makes it all the radder. 2nd went to last years winner, Bucky Lasek. I had Bucky pegged to win this year now that he has his own mammoth training facility in his backyard. (He also has a bowl, ha ha ha.) He killed it, but didn’t seem to want to get his hand dirty in the snake session as much as others. He did make it all look effortless though.

This brings us to this years winner, the brazilian 14 year old wonderkid, Pedro Barros. He wanted the $12,000 to buy sweets, so he turned it on won a lifetime of tooth decay with fully upside 540’s of every variety (my favourite being the stalefish). There was no doubt that he won it and that we’ll see more of him in the years to come.

So to conclude this slightly lengthy article, Thanks to the World Cup of Skateboarding, especially Dave Duncan and Sasha Steinhorst for the hospitality and thank to the sponsors, Vans, Oakley, Tony Hawks Ride and Mountain Dew for putting on a great show.

Full Results can be found here and a video of the comp from the Australian Slam Skate Mag here.