Thanks to the rise of blogs, there are so many rappers that have peppered the web in the past few years yet it’s nigh on impossible to keep track of them all. So we have decided to give you guys the heads up on rappers that are coming through that you definitely need to keep an eye and ear out for. Sometimes all it takes is that one track to hook you, getting you to press the rewind button so you can learn all the words straight away and sometimes it’s more of a slow burn, letting the music wash over you, submersing yourself into it before something clicks and you declare yourself a fan.

The list below is by no means gospel, but amongst all the names that you’ll be hearing sooner rather than later, there are some rappers who stand head and shoulders above the rest, and they can be found here. You won’t see any mention of the likes of Tyler the Creator or Jay Electronica because they’ve already grabbed the mainstream’s eye but hopefully there will be someone below that will get you interested!

So, without further ado, here is a list of the top five rappers you need to get into:

Yelawolf is certainly the best new rapper out there at the moment. He’s not hit the mainstream quite yet, but with the ink drying on his contract with Eminem’s Shady Records it can’t be fair off if the talent he showed on his Trunk Muzik mixtape [and it’s re-released with additional track half-brother Trunk Muzik 0-60] is anything to go by. He can switch up to double-time at the drop of a hat or he can run it slow like he does on Pop The Trunk below. Lazy journalists will no doubt refer to Catfish Billy as “The New Eminem” but pay no attention to that, he’d much rather rap about Chevys and getting drunk than murdering his Baby Momma. Alabama is well and truly on the map thanks to Yela. Get involved.

Already one album down, Fashawn is working hard on mixtapes having recently released Higher Learning 2 and Grizzly City 3 before releasing his sophomore effort. The Fresno MC might not be the brashest of rappers, but his smooth flow and beat selection are top notch. His debut Boys Meets World featured production by Exile, who provided the perfect backdrop for Fashawn to go in over, from sunny melodies to songs about suicide. If he continues the way he’s going, like he has over J. Cole’s beats, there will be a hell of a lot more people smiling their way down the street. If the track below doesn’t get you bouncing, you’ve got no soul.

Maryland’s Phil Ade has burst onto the scene in the past couple of years through his stellar Starting on JV and The Letterman mixtapes, showcasing his ability to rap over a diverse selection of beats before his Twitter-friendly #PhilAdeFriday tracks, which were released for free through the social networking site every Friday came to prominence at the start of 2011. He’s now put them into a mixtape of their own, with some tracks featuring him rapping over famous beats from the likes of Ice Cube and Mobb Deep and will be dropping his new album A Different World on July 12th. Check out the track below for some early LL Cool J influenced shit.

LA’s TiRon is another rapper who gives the listener a big beaming smile, he just seems to be having so much fun when he raps and it’s that infectious positivity that grabs the listener. From songs declaring his love for food or trainers to tracks discussing the importance of having a Wingman when trying to bag a chick at a party, TiRon [and his running mate Ayomari] delivers perfect call-and-response style tracks which bump along nicely whether you’re in the mood to get hype or whether you want some beats playing whilst you’re cleaning your flat. The track below is a perfect example of what to expect from the guy that brought the world his MSTRD and Ketchup mixtapes as well as T&A, the prelude to the debut album Sucker For Pumps which is a collaborative effort with Ayomari.

Top Tune: What You Waitin’ On f. Ayomari

Ohio rapper Stalley could have been a high-standard basketball player before injuries curtailed his sporting career. But the NBA’s loss is hip hop’s gain. He has got a fantastic flow, progressing from a backpacker delivery to straight up fire and back again with consummate ease and his beard shouldn’t be underestimated. His latest mixtape Lincoln Way Nights (Intelligent Bass Music) is the best example of why he’s such a competent and impressive MC, showing his dexterity over a number of different styles whilst all the while maintaining his own voice across the entirety of the 16 tracks. Check out Hercules below, the beat will get you immediately and once that’s hooked you’re in. 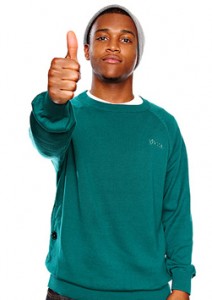 We featured on of their videos recently to tip you off about this duo and they’re back with another to get your head nodding.

TiRon and Ayomari dropped the Good Food video over the weekend and it immediately made us think of summer and, well, eating. If you’re down with all sorts of chow, this is definitely the song and video for you. Get involved and let’s get cooking!

You can hear the whole EP here.

TiRon & Ayomari – Good Food from The Cafeteria Line on Vimeo.

When it’s still grey and cloudy outside, all you really need is an injection of sunshine and this new track from TiRon and Ayomari is just that.

If you’re into it, you can grab his two free mixtapes, both with excellent condiment related titles here: Ketchup and MSTRD.

Now whilst they’re downloading, get your shades on, kick back and chill…

TiRon & Ayomari – What You Waiting On from The Cafeteria Line on Vimeo.