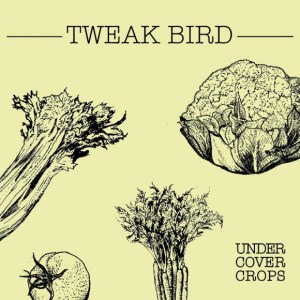 Back in 2010, the Crossfire office was buzzing on the debut Tweak Bird album. The crunching riffs of doom layered with catchy vocals played openly on this stereo here for months, but where the fuck have this band been since?

As we live in a society where the earth seems to spin at a million miles an hour faster than back in the 90’s due to this stupid thing that was invented called the interweb, we expect far too much from bands these days, but with Tweak Bird, they probably stuck up their middle fingers and said, “fuck it, we will drop our shit when we are ready”. And here it is, seven new tracks that will rip your ears a new beat with a plethora of new, filthy riffs and a cool arse vibe only associated with the Brother’s Bird.

Testing the psyche with a drug induced, robotic chant of ‘EVERYONE IS PARANOID’, Tweak Bird launch Undercover Crops with every stoner’s nightmare. A bong-full of repetitive words that you will never probably forget followed by what they are known best for, driving beats, crunching riffs and sing-a-long vocals that make up the track ‘People’, available for free download on this page.

Next track Phychorain will be engrained in your conscience for years once you hear it. They take this dream scape with aplomb, spreading imaginary rainbows across and underlay of haunting samples and baritone guitar riffs that would appease any Sabbath fan. The Weight only furthers the storm with an extension to Psychorain. These could easily be played back to back live and may have even been written in the same session. Who knows, but a breather is offered for the laid back vibes of Pigeons which sees the brothers come down a level, in a similar way to how Janes Addiction do so well. Once they’ve managed to completely pull back from dense riffs, Bunch O’ Brains brings the new material to a boil once again with slamming, repetitive slabs of stoner bliss and catchy vocal melodies. Seriously amazing stuff.

The mini-album ends on familiar riffs with Know It All and paves way for next year’s UK tour and full album that is said to be in the works. Overall, this 17 minute drug-fueled aural delight is yet another splendid offering from the two stoners that know best. Get Tweaking.