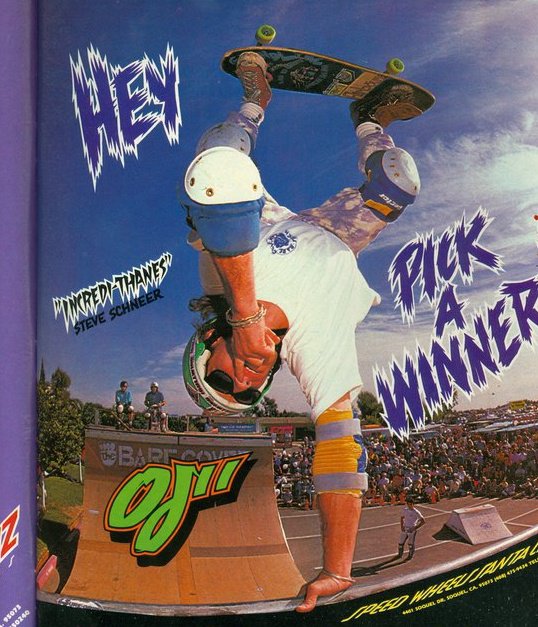 80s skate legend Steve Schneer unfortunately passed away yesterday. Schneer was a unique entertainer who loved a crowd and had an urge to seek fun. He often stole the show skating barefoot on vert and was famed for the invention of the Ho Ho Plant where his ridiculous gymnastic skills would bring a perfect handstand to the coping that he would stall for as long as he could. He also claimed in a TV interview to invent the frontside handplant in 1978 as seen below, and invented the ‘Beave Air’, but his one-foot rock and rolls, again, one of his own tricks, were class.

I remember seeing him skate at Southsea here in the United Kingdom back in 1990 at a comp where he took the honours all day long. (Footage below) The guy was a machine, a unique ripper whose gnarly skateboarding made that day memorable for so many reasons. He was unstoppable as he ripped that classic blue vert ramp and went out of his way to steal the show. I met him on the day and to be honest he scared the crap out of me, but in a very excitable way. I was a skate rat, eager to get in the middle of a jam to get the most out of the energy they created and his presence was absolutely massive.

Here’s a few words from various friends looking back at Steve’s amazing life:

NEIL DANNS: “The one thing that stood out was his high energy. He was always pushing himself to do better and he did some of the best inverts I have ever seen. He will be missed by many.” 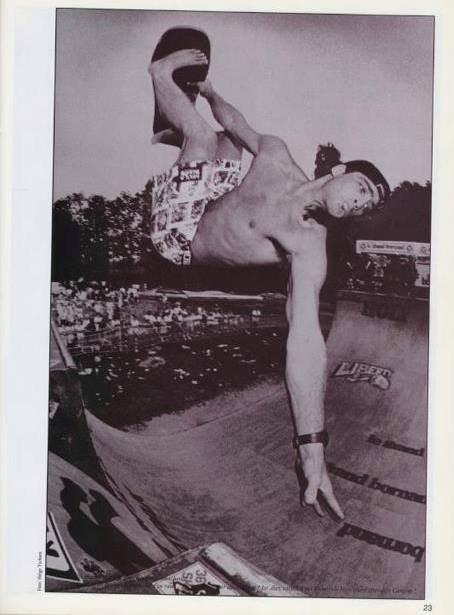 STEVE DOUGLAS: “I’m not sure when I met Steve for the first time- probably 1986, but it’s safe to say I probably heard him before I saw him. Steve was loud and was one of those guys that you would want to skate with he would make the session better, louder, more intense and more fun. What I remember about him was that he was always smiling always stoked and always ready for good times, all the time. He loved his partying and was also a tough bastard, a lad you want on your side and of course he was, he was a skateboarder. I feel proud that I met him and I could call him a friend.

Steve will be missed, but for the people that did not know him he lived his life at 100mph and he made his days count. He will not be forgotten. The last time I saw Steve was May 2012, he came over to see me at the IASC conference. He had been over at Vans and he heard I was there and came over to see me before he left for home, as we had not seen each other for years. He really made my day and I appreciated that he made the effort. It was so good to see him, he looked great and his passion and smiles were as I remembered.

You will be missed Steve. Skateboarding has had many truly colorful characters and he was one of the best. Gutted, but he will never be forgotten, and I’ll never forget that last meeting and all the fun times, and for those – THANKS.”

SHANE O’BRIEN: “I remember many occasions with Steve Schneer state-side. One time at the Arizona “88” NSA comp weekend, Steve was in competition with his other team mates to live on as little amount of money $ as possible per day. He won and got it down to 31 cents per 24 hrs and won a bonus payment from his team captain! For pure shock value he would run and jump off the hotel roof into the swimming pool making sure normal hotel guests were present pool-side. “SPLASH” – you know ha ha! Just to top it off for the weekend, Steve would do bare-foot frontside ollie handrails into the pool whilst it was full of hotel guests. Did he care? Answers on a post card please!!! Steve was always a character who did his own thing and that’s what he will be remembered for. It’s a SAD loss but he made his mark in World Skateboarding History.”

DON BROWN: “I didn’t know Steve super well but got to hang with him around the contests in the 80’s. It was guaranteed that when Steve was around good times were right there with him!! I always remember stumbling drunk into the hotel lobby at a Munster contest. As I walked through the door it was pure mayhem. Steve and Gator were both naked and wrestling the hotel manager! (who was 6’5″ and built like a train!) To most, this would seem weird to me but it seemed like a normal occurrence when those two got together! RIP Steve. I know for a fact that wherever you are now you are pushing the limits of yourself and everyone around you!”

Our thoughts go out to all his family, his friends and everyone who shared the good times skating sessions with him or watching him skate all over the world. RIP Steve Schneer