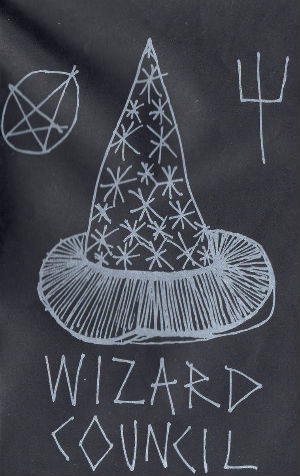 It should be noted prior to giving Gnargore any of your precious monies that there is only one title in Wizard Council, and it reads ‘No Refunds’. The good news is that you won’t want to give this DVD back at all because it’s just too much fucking fun. For the first time since sometime before video editors stopped going through their own tastes and yanking everyone’s section music off Gorilla Vs Bear I actually had a great time watching a scene video because it offered that crucial element to what inspires crews to make a video in the first place: that the people in it quite obviously love skating with one another.

On top of this there’s no uninspired time lapses or Belle and Seb circlejerks (there I go calling myself out again) here at all. Just rock, gore and metal, non-stop gnarshred skateboarding set in stark black and white.  It is fucking on now chaps.

There’s an identity here too, as Ryan Price kicks things off there’s something instantly recognisable as Gnargore. Now, I expect Tom will respond to this saying “yeah, that shit skating”, but one man’s trash can is another man’s gourmet feast. Bonelesses, wallrides, pivot fakies, mosher drops, pole-jams, willy grinds, hippy jumps, front rocks, all these tricks are acquired tastes, to all those out there who have had the courage to acquire these ‘real men’ tricks, then you will be gratuitously rewarded here. It is fully a non-brand kind of brand that I can buy into.

Immediate highlights that come to mind after this most enjoyable first viewing include Harrison Thom’s constant one-foot-on-the-ground action, particularly that boneless at Hereford (for that is no mean feat…although Tom Carr later bonelesses into it and I shat myself), Arran Burrows‘ 50-50 on a burnt out car, Tom Carr’s super stylish last trick, Tom Gillespie’s late shove and Dan Jordan’s intro and subsequent tight jean fetish scene. It was around this point onwards that I lost track of who I was watching but the point of Wizard Council isn’t the skate video lone hero, but the fact that Gnargore are a collective. This video is a refreshing well-needed reminder that crews of friends who skate and have a great time and make awesome scene videos are very much still alive. Ave it West Midlands!

For everything you need to know about Gnargore, head over here to read Brewer’s monster interview with head honcho Tom Gillespie. Then have a look below for some choice cuts from the film that Tom sliced for us.