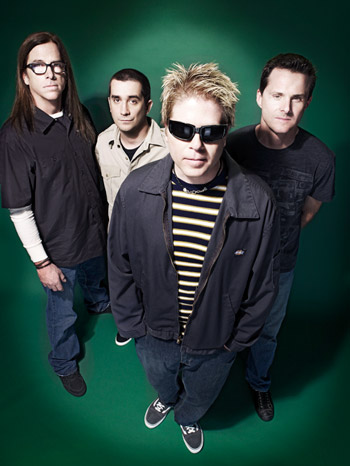 ‘Here’s a song from our new album!” Those dreaded words come courtesy of Offspring main man Dexter Holland as his band launch into new single ‘Days Go By’, which is greeted with little more than polite cheers and nodding from the sold-out crowd. At best a pale imitation of the Foo Fighters’ ‘Times Like These’, it doesn’t bode well for the Californian quartet’s future, but thankfully it’s the only slip-up of the evening.

An evening that, incidentally, is all about the past. You’ve got to hand it to Holland and co; it’s been well over a decade since they last made a truly great record, but they’re smart enough to realise their glory days are behind them, and to play what we want to hear. To that end, they’ve lured us into the Empire with a tasty carrot; the prospect of hearing 1992’s ‘Ignition’ album in full, which lends the evening an almost tangible sense of occasion.

Excitement trumps age tonight, with the largely 30-something crowd going crazy as the band rip through the likes of ‘Take It Like A Man’ and ‘Burn It Up’; songs infused with the kind of verve and black humour that has been sorely lacking in their recent material. A spine-tingling ‘Dirty Magic’ rivals even an encore airing of ‘Pretty Fly (For A White Guy)’ in terms of sing-along volume, and after a short post-‘Ignition’ break, the mid-90s highlights come thick and fast. Road-rage anthem ‘Bad Habit’? ‘A couple of rarities here and there? Mega-hit ‘Come Out And Play’? Check, check and check – all delivered at breakneck speed and precious little fuss.

The days of plying their trade in sold-out arenas are long gone, but as ‘Self Esteem’ seemingly transforms the floor into a giant riff-powered trampoline, it’s clear that The Offspring’s live show – on a good day – remains the ace up their collective sleeve. Sparks of the fire of old still remain, and these middle-aged men can still kill the old way.