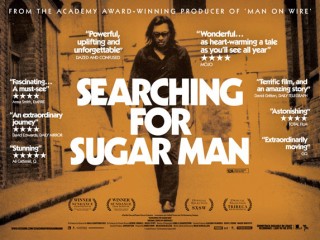 I’m always game for an interesting Rock’n’Roll documentary, even if it’s about a musician or genre I’m not that familiar with. If the subject’s story is told and filmed well, then I’m sure to get something out of it. And I sure got something out of this truly unique tale.

“Searching For Sugarman” follows the curious journey of Sixto Rodriguez, an enigmatic young Hispanic troubadour, who plays in the bars of Sixties Detroit, and soon draws the attention of a local record producer. For an idealistic working class lad, that doesn’t exactly seem to have his eye on the prize, Rodriguez lands a record deal with Hollywood based Sussex Records, which takes him to California. Sussex thinks they have just signed the new Bob Dylan, and their boy is going to be a mega-star. But his debut album “Cold Fact” is a total flop, and its follow up, “Coming From Reality”, fares little better. Dropped by his label, Rodriguez returns to Detroit, and soon drops completely off the radar.

The entertainment business is littered with similar tales of artistes whose careers were over before they’d even begun, and barely even made the ‘Where Are They Now’ file. So here’s the twist; a copy of “Cold Fact” turns up in early Seventies South Africa, a country under the control of an ugly government, determined to enforce their twisted vision of racial superiority through apartheid. But lots of young white Afrikaners had no interest in living in a country divided upon racial lines, and were determined to make their opinions heard. Via word of mouth, and copied tapes, imports, and no doubt a fair few bootlegs, “Cold Fact” becomes the soundtrack to their protests, and a massive hit in South Africa, selling by the bucket load. Licensed to at least 3 local labels, the owners, who are all interviewed, confirm they sent royalties diligently back to the publishers. And I believed them. Unlike the most likely recipient of the funds, former Sussex Records head honcho Clarence Avant, who reacts to questions of the royalties whereabouts with an aggressive hostility that implies he’s trying to cover up the truth.

Back in the USA, Rodriguez was oblivious to his cult status, thousands of miles away, in Southern Africa, where, the fate of their musical icon is somewhat more distorted, and rumors of his demise include him having committed suicide on stage. The rumors become folklore, and accepted as fact. Rodriguez RIP.

Enter the wonderful Stephen “Sugar” Segerman, a super fan of Rodriguez’s music, and determined to learn what did actually happen to the man whose music inspired his generation. He studies the lyrics for clues, utilizes the internet, and makes an ally in music journalist Craig Bartholomew-Strydom. Between them… well, I wont give too much more away, but needless to say, they come up trumps, and not only succeed with satisfying their own obsessive curiosity, but fulfill a dream that no-one in their home country thought possible.

I left the cinema totally bowled over by this fascinating story. The filming by Malik Bendjelloul and Camilla Skagerström is wonderfully shot, and incredibly creative. Honestly, if you get a chance to catch this either on the big screen, or when it’s released on DVD, don’t snooze on it, this is one of the best films I’ve seen in ages.