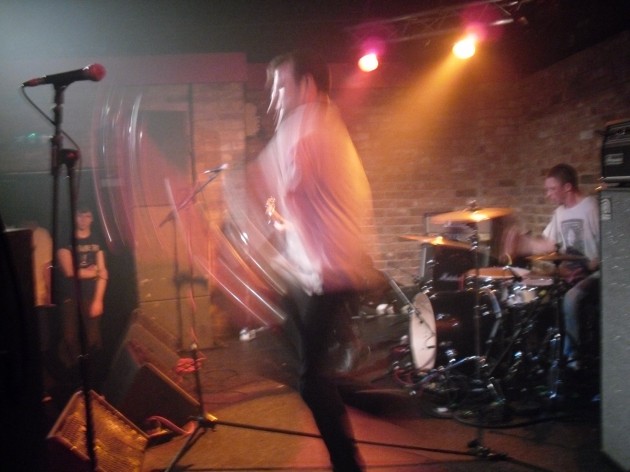 Walking through the crowd, vocalist Ross Farrar jumps on stage, only to grab the mic and jump back in as the band launches into ‘Hysteria’ from their latest offering ‘Zoo’. Disappointingly, the crowd don’t really respond and keep a safe distance back – this all changes when the band kick into ‘Sick’ though (from the excellent Rohnert Park LP) and everyone surges forward, no longer worried about being hit my the singers mic stand that he waves wildly around his head.

The rest of the set continues with material heavy from the bands last two offerings, which depart from the more straight forward Hardcore of the Violence LP and embrace the stranger side of Punk Rock, from ‘Brace’ to ‘The Doldrums’ and then into their cover of legendary Dischord band Red C’s ‘Pressure’s On’, it’s like watching a nervous breakdown, the desperation on the singers face says a lot, and though unsettling, you know it wouldn’t work any other way.

Ending the set with ‘End’, the last forty minutes have been an intense, bloody, beer soaked mess with the odd mini riot thrown in for good measure. Ceremony proved tonight they are a great band who have the ability to drop an explosive show and push the boundaries on the punk scene. Don’t miss it.