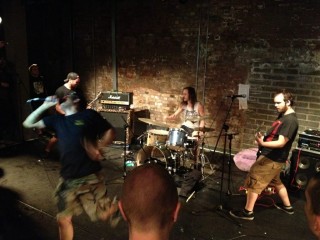 A little bit of Washington DC arrived in town tonight in the shape of straight edge hardcore ragers Sick Fix and Coke Bust. In true DIY spirit this gig is hosted in a youth centre basement, is all ages, has stalls selling feminist literature, is bring your own booze, and leave your attitude at the door.

First onto the floor are the female fronted Sick Fix who lurch into a set of grindcore fuelled hardcore. Pounding with a rage and intensity of acts like Nails their twisted riffery chugs and lacerates through the blast beats to the beatdowns and is only let down by the small PA that just cannot handle a noise of this magnitude. Vocalist Michelle Northam vents her spleen in a guttural fashion, her face reddening with each rasp as she paces back and forth. This girl has some serious lungs on her. Tracks from their forthcoming debut album ‘Vexed‘ are aired tonight and after thirty minutes of relentless brutality they are greeted with rapturous applause and a queue at the merch table. This is band that takes no prisoners.

It’s Coke Bust‘s second visit to these shores and if you caught their last London show in 2010 you know you’re in for a treat. It becomes quickly apparent that they are sharing their drummer with Sick Fix, this man has to be a machine! After 30 minutes of blast beat skin pounding during their set he’s back to do it all over again with Coke Bust, a task which he makes look effortless. If only it were an Olympic sport, he’d be in for a medal. Coke Bust are just as fast and furious in their song delivery as their support tonight but in contrast encompass a more traditional hardcore sound, buzzing riffs and beatdown’s providing a cutting backdrop to front man Nick Tape’s scathing delivery, as he throws himself left to right, thrusting the mic into the crowd for odd gang chorus. A new track from their recent Vaccine split 7″ is debuted alongside more familiar material from their 2010 debut ‘Lines In The Sand‘. As the crowd is ushered forwards for the finale the pit erupts in a fitting climax to an awesome show.

It’s great to witness two bands that take the power and precision speed of grindcore but manage to break it’s monotony yet retain its ferocity. Sick Fix and Coke Bust manage this whilst each putting their own unique spin on it. If this is the new sound of hardcore emerging from DC these days then we can expect more excellent shows by young bands like these.