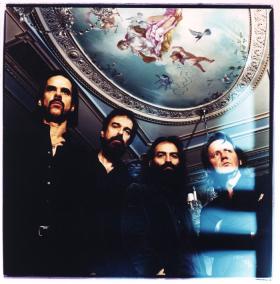 Heavy Metal was spawned in the West Midlands by bands like Black Sabbath, Judas Priest, Led Zeppelin, Napalm Death and more. To celebrate this iconic cultural movement in sound, Home Of Metal is calling for all heavy metal lovers to submit their own connections with the scene to their new digital archive.

This could include posters, ticket stubs, press releases, setlists, flyers, photos, fan zines… just anything that could be of interest to another heavy metal fan. Head over to the Home Of Metal website to become a part of the pride of the Black Country and represent the sound that rocked the world.

Leeds based rap-pop outfit Middleman are continuing the British notion of blending feel good guitar tracks over gritty urban commentary from heavily accented blokes with a lot to say.

Middleman will be releasing their new single ‘It’s Not Over Yet‘ on August 30th. You can have a look at the brand new video for it here…

British rockers The Charlatans have posted a video of their new single ‘Love Is Ending‘ which is to be released on August 2nd.

The video was directed by Douglas Hart of The Jesus And Mary Chain and features an blossoming oxymoronic relationship between ballet and alternative rock. Expect the usual catchy choruses and a fuzzy jingle jangle that blends darkness with optimism seamlessly, the perfect sound to accompany the contrapuntal visuals.

The band will release their eleventh studio album ‘Who We Touch‘ on September 2nd.

Spacey synth rockers Klaxons have posted the video for ‘Echoes‘ the opening track on their upcoming album ‘Surfing The Void‘.

The video features the band playing a dizzying jam, filling the vaccuous desert landscape with their unmistakable sound. You can see it all below.

Debut single ‘Echoes‘ will be released on August 16th. ‘Surfing The Void‘ is due on August 23rd.

California’s Avenged Sevenfold have announced that they will be embarking on a co-headline tour of the UK with Stone Sour in October and November.

The band who were recently voted 2nd best band in the world by Ultimate Guitar Magazine are very excited to return to the UK. Gutiarist Zacky Vengence commented ‘you have been warned’.

Their fifth studio album, ‘Nightmare‘, will be released on July 26th.

They will be playing the following dates…

Fresh off a storming UK tour supporting none other than Ozzy Osbourne at the iTunes Festival, The Sword have posted a free download of a new album track ‘Tres Brujas‘ so treat your ears!

The Sword are definitely a band that you should be listening to, head over here for our live review of their recent show with Gentlemen’s Pistols at The Barfly.