Some Nights
(Fueled By Ramen) 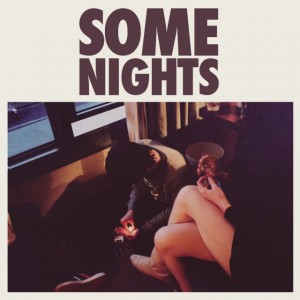 Although not slated for UK release just yet, we couldn’t help but post something about indie-pop renegades fun.’s new album, especially as it’s streaming in its entirety now for all to hear (check it out in the player below).

Some Nights is the band’s second album following the dissolution of singer Nat Ruess’ much-loved former band The Format. Whilst he Format developed somewhat of a cult following in their day, fun. look set for bigger things as the lead-up to the release of this album has come to demonstrate. Lead track from the album We Are Young (featuring none other than Janelle Monae) was performed on pop culture phenomenon Glee a few weeks back, and the same track was featured on a Chevy advert screened during a Superbowl commercial break.

The album’s producer Jeff Bhasker appears to be the link to the world of the likes of Monae, having worked with artists so massively popular as Alicia Keys, Adam Lambert and Kanye West. Hopefully it stands to reason that fun. will follow in the footsteps of such artists and hit the heady heights of immense commercial success.

Some Nights is supremely poppy. However, it appeals to pop sensibilities in the most quirky of ways as title track Some Nights and its intro demonstrate. Bombastic choral flourishes juxtaposed with pulsating electronic interjections, vocoder effects and the purest of melodic vocals from Ruess, make for an eclectic and unusual album to say the least. One Foot is another standout track, with its “woooahs” punctuated by synthesized brass being particularly inviting to the listener. A jarring key-change midway through is also aurally inspiring. Despite a lot of the instrumental backing being of synthetic origin on this album, everything feels very organic and, above all, musical. Some Nights is clearly an investigation into unconventional sounds but at the end of it all, there are some massive tunes on the album. Potentially huge pop songs abound.

Fun. – Some Nights by Fueled By Ramen