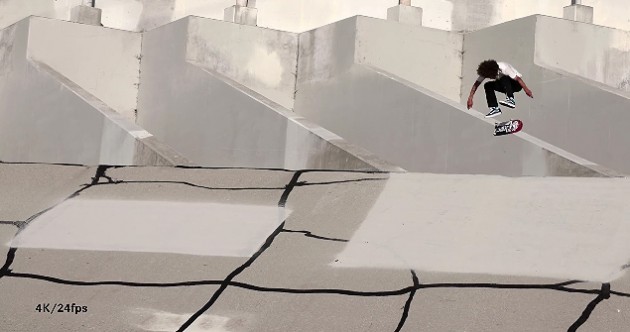 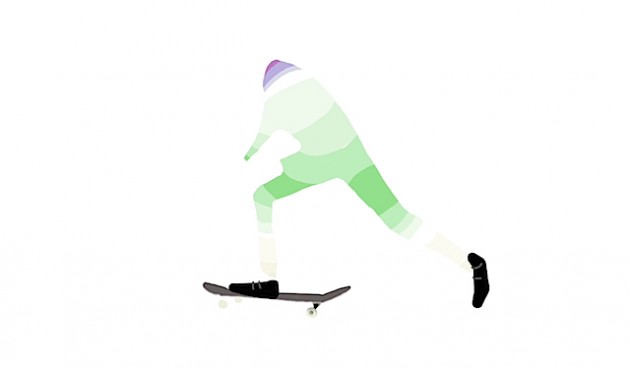 Check out this animated video put together by Fred Mortagne and others celebrating the 10th anniversary of the MILK store in Nantes, France. This was hand made animation for a collective exhibition. Fascinating work.

Mourn the apparent last of the French Fred tapes with none other than the British wizard of all things skateboarding, Tom Penny. I don’t know whether to first discuss the sadness that Fred Mortagne’s incredible archive of tapes from such an important period of skateboarding has come to an end, or the fact that unseen Penny footage is beyond gold.

The only way of leading out of this is to doff your hat to French Fred as his dedication to filming and photographing skateboarding his entire life is commendable. Thanks for everything.

Find more of Fred’s incredible work explained in our feature with him. 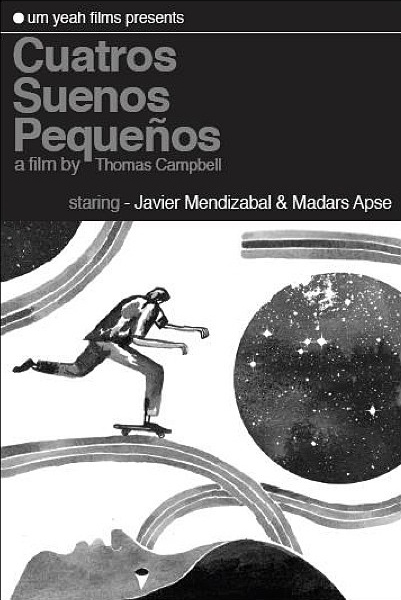 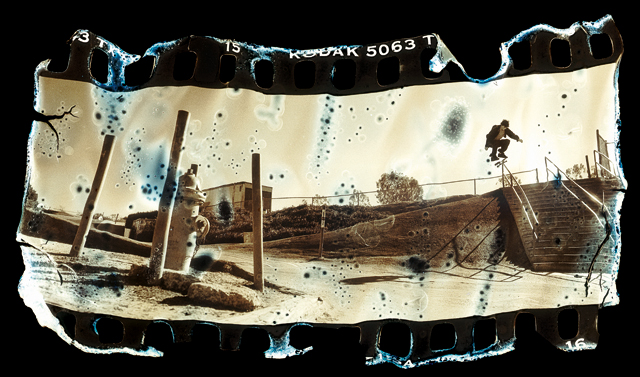 History tells us that you will find only a handful of unique individuals within every culture worldwide. Look across the pond to France and the big book of skateboard history there will reveal that the creative mind found within Fred Mortagne is one of their country’s finest.

His sterling work within film making launched back in 2000 from delivering the wonderful éS ‘Menikmati’ video. The cast featured the likes of Ronnie Creager, Rick McCrank and Eric Koston to name a few but his relationships with the likes of Arto Saari and Tom Penny led him to make one of skateboarding’s most legendary videos ever: Flip Skateboards’ ‘Sorry’. Fred’s work here is unique. Call it the right time, the right team, whatever you want, this film launched an assault on skateboarding in 2002 and left a crater for every other team on the scene to crawl out of. Fred’s film direction continued from there with stunning work alongside Cliché Skateboards. Their relationship blossomed and led to full length productions that have seen the brand become a world-wide force.

The other side of Fred’s talent is documented successfully in photography. Six year’s ago, before the trend of Facebook ‘likes’ and The Berrics, we welcomed his unique photographic skills to our Triple Shot features in 2006, so here’s an overdue sequel to what was one of our most read features back then.

Fred is now a staunch WeActivist and is about to participate in Red Bull’s Illume photo competition. 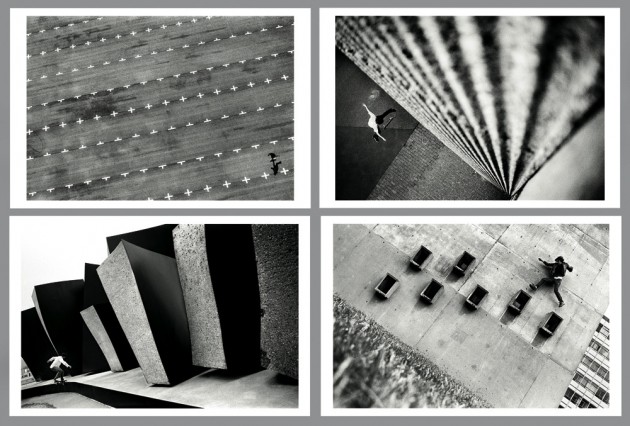 Easy Fred, great to see that you have unleashed your ‘Hand in Hand’ book online this month. Looking back, what would you change if you were to travel back to Israel  tomorrow?

I would go during summertime, as the days would be longer than when we went in November. I didn’t want to shoot at night or use flashes but it was getting dark at 4:30pm! I had to change my plans a little bit as a result and didn’t come up with as many skate pics than I personally wanted, and in the way I normally shoot them. It was frustrating for sure but going in the summertime would probably be too hot! I’d rather go somewhere new!

Taking us to the present day we have seen that you have passed over duties of film making to Boris Proust for the new Cliché video ‘Bon Voyage’, do you have footage in this forthcoming production?

So so so. the thing is, as crazy as it might sound, considering the history we have together, we completely parted ways with Cliché. I am not doing any work for them anymore, nor will I be involved in anyway with their new video. There may be a few old clips in there that I filmed but that’s all. A chapter has turned. Although, this doesn’t mean I’m not working on other projects with some of Cliché’s riders. I’m of course very close with the riders. I like working with Flo Mirtain who’s has good ideas and motivation. We made a short movie in French making fun of skateboarding, so I’m working on making the English version of it.

What other projects are coming soon?

The biggest project I’ve been working on directly involves Javier Mendizabal and is directed by Thomas Campbell for whom I have the biggest respect. This has been filmed entirely on 16mm film and should drop around summer time and has been a super exciting project to work on. I’m very close with Javier and truly respect his skateboarding. In addition I’m working on couple ‘making of’s’ about that project.

There’s much exciting stuff to come, and you will find out sooner or later but expect some very diverse things. The outcomes will be very different from each other. No routine, no repetition, and of course, no following of formats either, I’m trying to bring new stuff.

Take us through how your ‘burnt’ photo series were put together? Which shot has been most popular?

One day I came across some shitty slides. Nothing interesting on them. Instead of throwing them to the thrash, I figured out I could do some wild experiments. Being a pyromaniac, it didn’t take long for me to realize how good burnt stuff could be. The Mark Appleyard kickflip at the top of this page seems to be a popular one.

What are you shooting on mostly these days?

Still on my good old Nikon FM2, my first reflex camera from 2001. Well, I had to get a new one after accidentally destroying the shutter of the original one. It was a sad moment. So I still shoot mostly with film, but it’s very tough because no one supports this format anymore and magazines pay ridiculous fees these days. This alone has pushed people to use digital only. Economics suck.

We asked Fred to ‘Expose’ some of his most cherished photos over the years. Enjoy the tales behind the shoots. 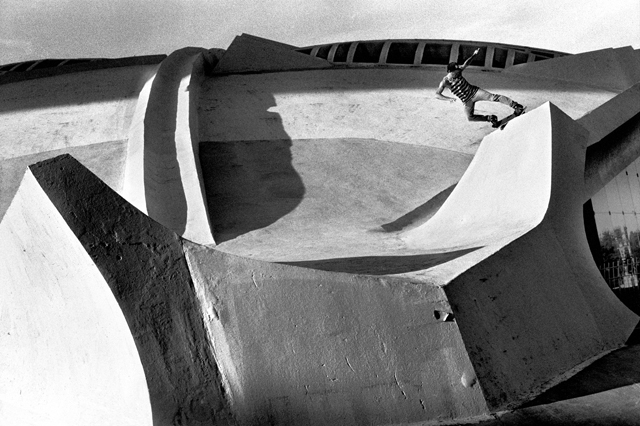 This photo above of Alex Gavin was shot in Montreal in 2008. Some force attracted me to the Olympic Stadium. I knew I had to go there. In one day, I shot more epic stuff than in months. There are tons of hyper photogenic spots so I was in heaven and I also had the chance to hook up with great and super motivated skateboarders. All the ingredients were gathered for pure epicness. 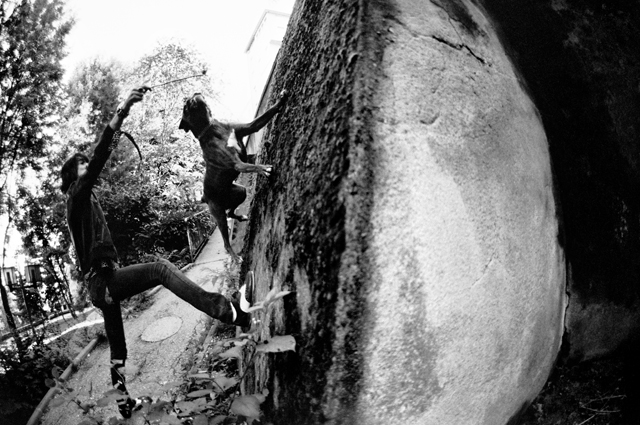 Ali Boulala was living in Lyon for few years. Of course being around Ali, it’s pure comedy almost all the time. Just going out walking the dog might turn into something special. It was the first time in my life, and very probably the last, that I saw a dog doing some wallrides!

I like shooting with Javier Mendizabal, he always super down for missions. His skating is very photogenic and different. I like the fact he’s into photography too. He shoots really good photos, so he perfectly understands some situations I put him in; very specific and precise ones to create strong images. Sometimes it requires patience and involvement from the “models”, and with Javier, for this fact, it’s always easy to shoot with him. 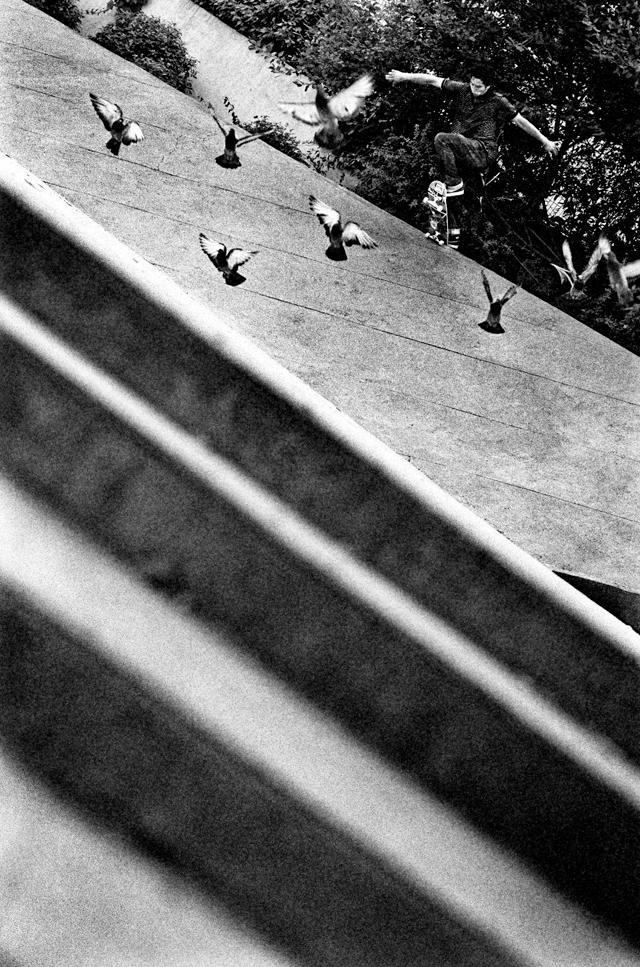 If I’d have requested to make this photo happen, it probably would never have come to fruition. Sometimes photography is just magic, without you doing anything. We didn’t even try to attract the flying rats, they would come back on their own and they all flew off at the right time in the right spots. I must say though that those little bastards were annoying Mr Salazar so much that the madness was setting in! Omar Salazar, Fs bluntslide, Lyon, 2006. 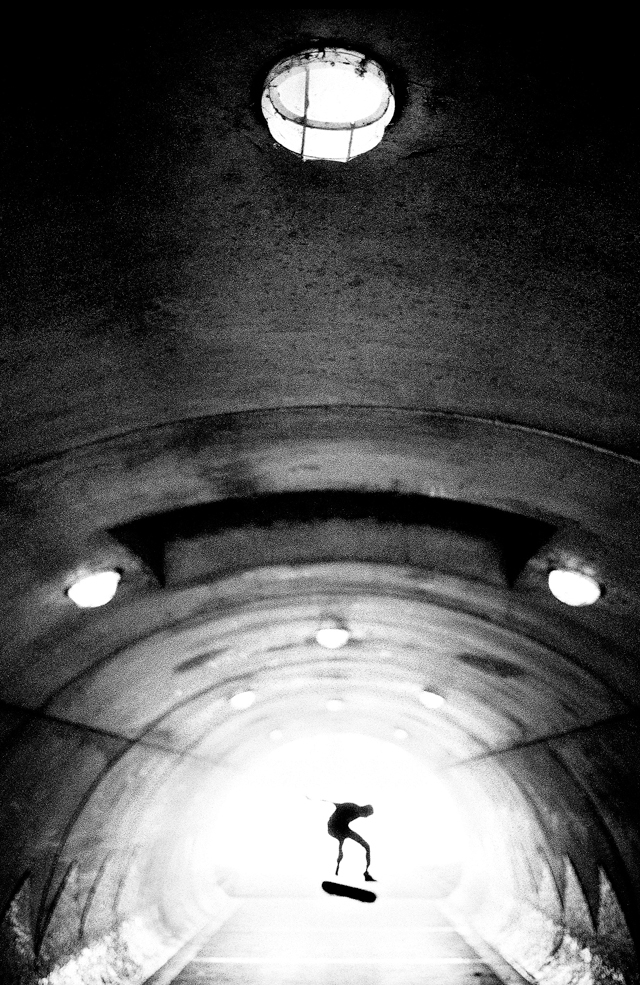 The tricks need to be crazy and amazing in order to make great skateboard pictures from a false idea. Sylvain Tognelli, bs 180 flip, Lyon. 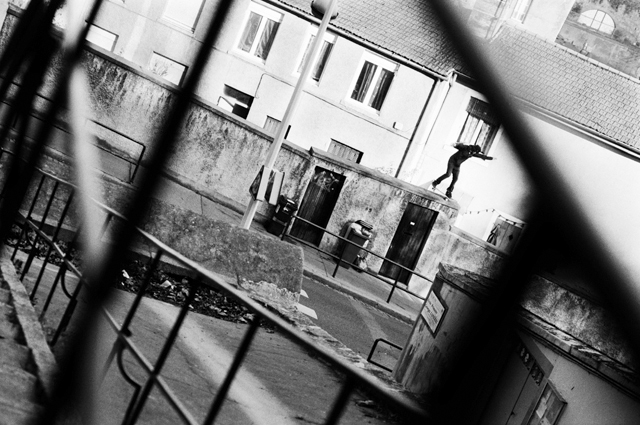 This is in my neighbourhood. I passed this place for about 20 years until I realised it could be turned into a skate spot with the right people involved such as Steve Forstner (pictured) and Ali Boulala. It’s a very strange and limited spot and the only time it was skated, but I’m stoked we did it. 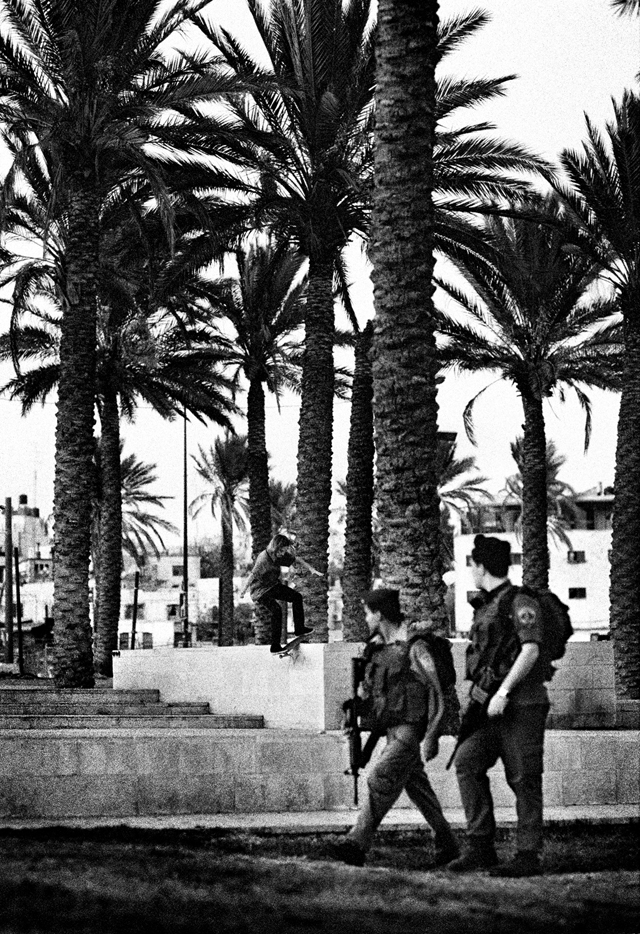 The confrontation between different worlds. Some people focus on playing, while some others are into fighting. Not much else to say. This is from my book called “Hand in Hand” that you can watch online down ↓ there. Charles Collet Fs lipslide, Jerusalem 2010. 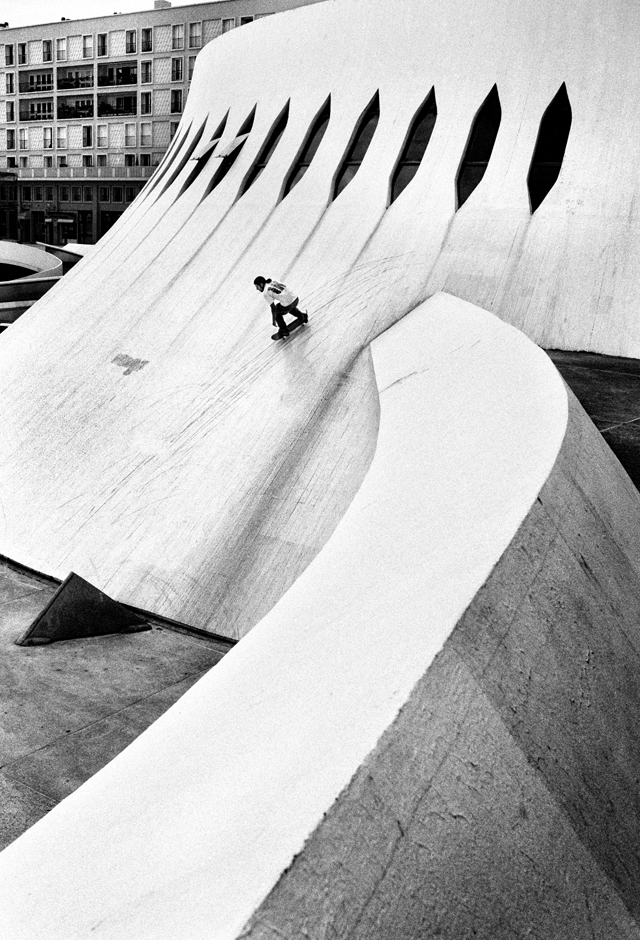 I obviously love the work of Brazilian architect Oscar Niemeyer who passed away in 2012 at the age of 105! He never knew but he had a great sense of building such great spots for skateboarders. Ricardo Fonseca in Le Havre, France. 2005. 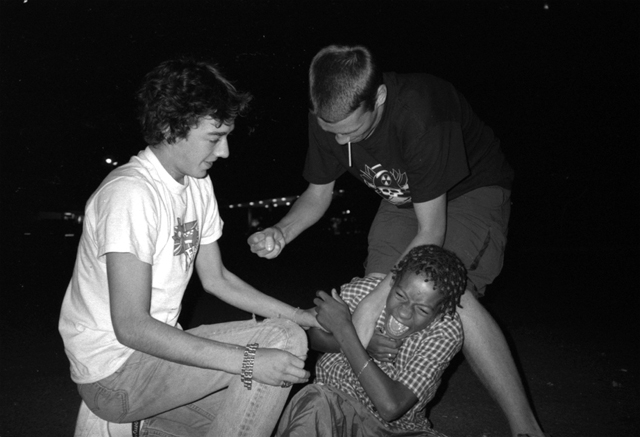 Without knowing I started filming for ‘Sorry’ while making éS ‘Menikmati’. This was on the very first Flip trip I had been on back in 1999 in France. The whole team went to visit Tom Penny in the french countryside where he lived with his mum. This picture sums up the general vibe and atmosphere of the trip pretty well; a batch of wild teenagers going crazy all the time. Funny memories!

Flick through Fred’s ‘Hand in Hand’ online book and if you feel like treating yourself to one of his ‘burnt’ series photos or even a pack of 4 postcards featured in this article, they are available now from his Big Cartel site. 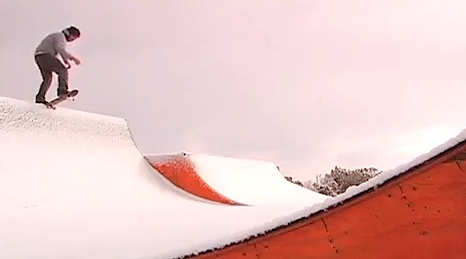 The winter video edit comp deadline is approaching in 2 weeks time. Have you started editing your footage yet?

French Fred has released some old footage of Geoff Rowley, Jimmy Boyes and Gabriel Friedman skating an icy mini ramp in Arizona overnight, so get hyped on the fact that others out there are tackling the elements head on. 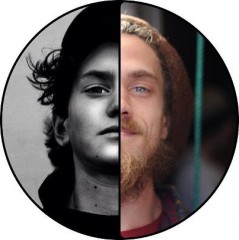 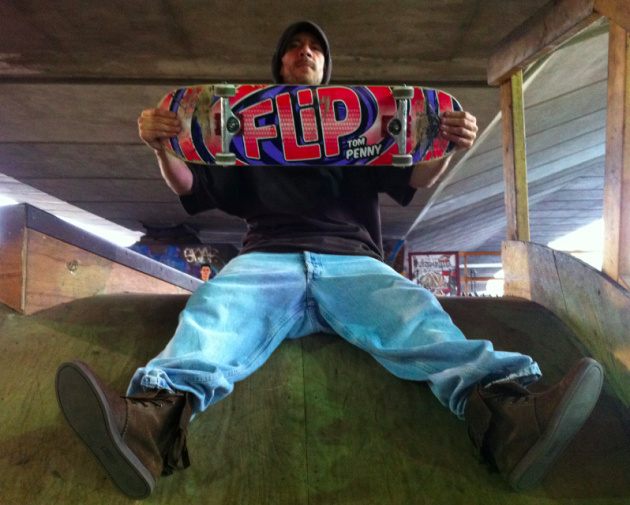 In related Flip news, new recruit Oscar Meza will unleash a full section online on October 8th. Put it in your dairy. 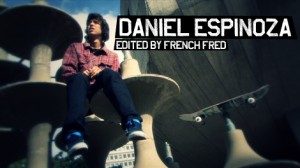 Cliché Skateboards have released the last in the series of ads edited by Fred Mortagne. Watch Daniel Espinoza’s footage here and get hyped on a new video for Summer 2012. Yep, it’s a year away from completion but will always be worth the wait.