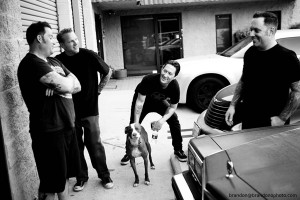 Wander over to the merch table tonight, and you’ll see copies of Face To Face’s excellent new album ‘Laugh Now, Laugh Later’ for sale; each bearing a sticker that reads: “For fans of Green Day, Rancid, The Offspring, NOFX, Blink 182 and Pennywise!”. Indeed, Face To Face would and should appeal to any fan of what is increasingly being dubbed ‘90s skate-punk’ (damn, we’re getting old), and even if they’ve never shifted tickets on quite the same levels as the aforementioned bands, they’ve put their name to enough quality tunes to pack out the Peel. Not bad, considering it’s their first proper UK jaunt in almost a decade.

The Arteries get things off to a fine start, ripping through the kind of raw but melodic set that befits one of the UK’s best new punk bands;  with vocalist Miles jumping down into the crowd to screeh his words into the faces of the early birds. Canadian quartet the Flatliners are a similarly abrasive bunch; taking the tired old ska-punk blueprint and re-routing it into darker territory via a heavy rock n’ roll edge. Worthy of a headline slot here in their own right, for sure.

But of course, the real treat is yet to come, and as Trever Keith’s crew rip into ‘You’ve Done Nothing’, the floor explodes into a pogoing, finger-pointing mass of folks who can hardly believe that Face To Face are playing their local. It’s tempting to wonder if they’d have gained a bigger UK following by touring here as often as, say, their former label-mates No Use For A Name and Lagwagon used to do; but then, Face To Face have always been about quality rather than quantity.

The shoulda-been-hits come thick and fast, and the sweat soon starts to drip down the walls of the Peel as the crowd clamber over each other to share backing vocal duties with Scott Shiflett (arguably one of the most underrated bassists in punk rock). New songs like ‘It’s Not All About You’ are replete with the band’s trademark melodies and smart lyrics, and by the time they sign off with ‘It’s Not Over’, it’s clear that Face To Face could teach some of their more popular peers a thing or two about maturing in fine style.