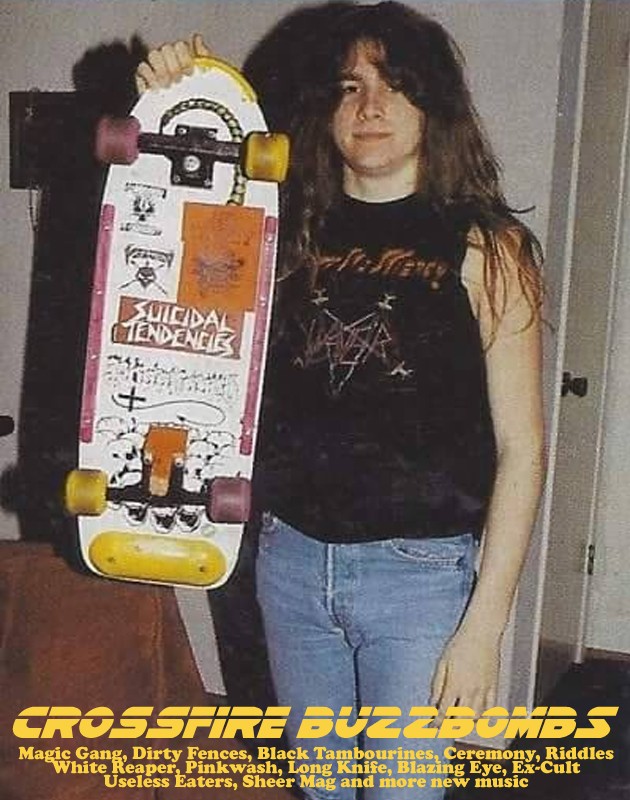 Useless Eaters is basically Seth Sutton, and much like the reverb-troubadour Jay Reatard (RIP), he’s been defecating droplets of punk distortion like loose stool, while making music hard like a bar-room stool to pick up in a saloon brawl. The album Singles: 2011 – 2014 contains rich pickings ranging from Devo-esque futuristic Cle-punk like ‘Bloody Ripper’ through to anthemic ‘I Hate The Kids’ featuring garage rock doyen Ty Segall, but my fav is ‘The Moves’, coming on like electrodes to the abdomen. – Nick Hutchings

Set to destroy London’s Power Lunches with their raucous two-man din on June 9th, Pinkwash are steaming with rage on their latest cut. And with good reason. “Long after acceptance comes extreme bitterness”, guitarist Joey Doubek recently told Pitchfork of the track’s deeply personal inspiration. It does’t take a genius to figure this one out, do not miss the chance to see them next month. – Dave Palmer

The Black Tambourines – ‘No Action’ (Self Released)

This Cornwall band stole the show back in 2013 with ‘Ghost At A Party’. A tune that was on repeat in here for what seems like forever. Well, they came back for a Record Store Day release with a new track that sounds like they’ve been up for weeks on end on speed and moonshine. Gone are the laid back sneers and melodic surf jangles, now replaced with ferociously snarling garage punk. We cannot wait for the new album in August as this band have so much to give – watch this space. – Zac

Get in on this title track from Ex-Cult’s 2015 EP. Super dark, hypnotic and raging Death Punk from Memphis, Tennessee. Anyone got a light? – Pete Craven

Judy is a punk, and that’s why the Ramones enthralled scuzz bucket glam racketeers Dirty Fences don’t want her to go. Using ‘The Dirt’ as their how-to-guide, they will probably wind up making both friends and enemies, throwing windmills and nunchucks, punching bouncers and kissing groupies. It’s a helluva ride back into the 80s on the four DeLoreans of the apocalypse. – Nick Hutchings

Ceremony are unable to make the same record twice. Every album they’ve released has been a step in a new direction and this one may be the boldest yet. Famously named after a New Order song, Ceremony’s new album, The L Shaped Man is the band fully embracing an influence from the classic Manc band. Vocalist Ross Farrar now croons, not roars. It’s bound to upset more than a few fans of the band’s visceral earlier material but it’s a step that feels natural for the band. Check out the first single, ‘The Separation’, now and embrace the synths. – Tim Lewis

Only 2 weeks ago I found myself packed like a sardine in someone’s bedroom in Brighton where The Magic Gang had the entire place swinging from the light sockets – until the electricity blew. Their laid-back catchy pop tunes have become somewhat infectious since, and every time I hear this track in public I start bundling people. – Zac

Hailing from Hastings, this band of delinquents first pricked our ears with the crushing ‘Psyhedelic Power Engine Iron Claw Thunder Mistress’ single, dropped exclusively for Record Store day just gone. Reassuringly, they’re still burning up the road ahead with this anarchic video to match the single’s insane B-Side ‘Wizards Of War’. Turn this one up as far as it’ll go. – Dave Palmer

Totally ballistic Poison Idea infatuated Punk Rock from Portland, Oregon. Here’s a crusher from their new album Meditations on Self Destruction. They’ve just torn up the UK. You snoozed, you loozed… – Pete Craven

Blazing Eye – ‘No Outside’ (LVEUM)

At long last, La Vida Es En Mus have made Blazing Eye’s eponymous debut EP available for us Eurotrash. This LA band seem to be picking up fans from all over the world, uniting punks with their blown out Japanese-style hardcore. This is the opening song and probably the one they’re most known for. I recently saw them in New York and the second this song started, it went loony. One of the most exciting bands in hardcore and fingers crossed, a Euro tour is planned for 2016! – Tim Lewis

Having wowed us all late last year with their infectious 7″, Sheer Mag delivered the goods in the live arena too, leaving audiences stunned and industry tongues wagging aplenty at SXSW this year. Taken form their new release II, ‘Fan the Flames’ delivers more of the same irresistible garage rock, and sees singer Christina Halladay on fierce form. – Dave Palmer

If you are of the opinion that much of extreme metal these days is riddled with pro-tools and over technical, depleting so much of the power and energy, then check out Gruesome – these guys know how to do it! This is pure, raw, high energy death metal, just like they used to do it in the old days. Total Death, early Sepultura and Obituary worship, this is a massive guttural energy rush. Old school but not old age.