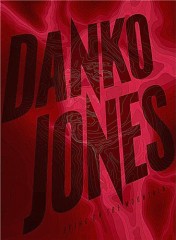 Formed in Toronto in the mid-Nineties the Canadian trio Danko Jones have been belting out their own punked up homage to the golden years of harder than hard, hard hard rock ever since, with half a dozen albums to their name, and a solid fan base at home, and in mainland Europe.

The main feature of this expansive 2x DVD package is the rockumentary ‘Bring On The Mountain’ where mainstays, and band founders, Danko Jones (vocals/guitar) and bassist John ‘JC’ Calabrese, talk us through the bands history. Format wise, this is a pretty standard setup, as the groups members and their inner circle of crew, soundmen, producers, et al, spill the beans on the ups and downs they’ve experienced over the years. What I liked was, the DJ guys come across as really regular fellas, who primarily let their music do the talking, and whose only ‘gimmick’ as such is the bellowing self-testifying witticisms of front man Danko, a man blessed with a booming set of vocal pipes, and endless stash of one liners and tongue in cheek innuendo. Politically correct they are not, but, as we’re reminded, in the timeless words of Nigel Tufnel… “What’s wrong with bein’ sexy?”

The key message of the DJ story is they’ve gotten where they have through sheer hard work, following the dictate of AC/DC that it’s a long way to the top, if you wanna Rock’n’Roll. Danko and JC have dedicated themselves to the cause, forgoing the 9 to 5, and keeping their heads above water between tours and recording, by working low pay jobs. When it comes to releasing music, the band refuse to sign to any label that would see them relinquishing their publishing rights. A very smart decision, and one a lot of bands over the years will have regretted not doing themselves. Not all members have shared the Danko vision, and at least half a dozen drummers have fallen by the wayside, but as the 90minutes draw to a conclusion there is a positive note with the addition of former Rocket From The Crypt drummer Atom Willard, who’s also served time in The Offspring, and Angels and Airwaves. This solidified line up has been recording a brand new album, and get ready to take to the road again.

Also on Disc One, is a 20minute short film that sees the Danko boys starring in a short thriller that features a host of cameos including Lemmy, Mike Watt, Selma Blair and Elijah Wood. It’s a pretty predictable plot line, but buoyed by decent acting, hard jams, and nice cinematography. Disc Two collates all the bands videos and a stack of live performances, making it a great companion piece to all Danko Jones fans collections.