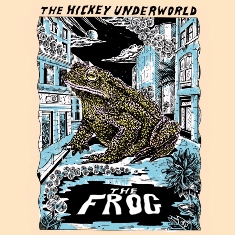 An immense yet disconcerting music video accompanies this single which is the first to be taken from The Hickey Underworld‘s forthcoming second album. Can you figure out what’s going on in the below? Because we’re not entirely sure. Could be any number of scenarios leading to the neverending-suicide-attempt-loop. Definitely some fucked-up shit. The starring roles are taken by the members of the band and the single itself also has that unnerving air about it. A darkly driven riff with vocals edging towards a pained howl yet somehow sounding calm and collected at the same time. Basically cool-as-fuck.

This is an achingly brilliant piece of off-kilter rock and roll and when it’s played live, the volume is ramped up with both instrumentals and vocals making such a visceral and alarming impact that the air is knocked clean out of your lungs. And you may be left a little deaf.