The last decade has seen the landscape of British skateboarding undergo a radical seismic shift. Though the small-town spots, blindbumps and cobbles that helped craft the UK’s idiosyncratic approach to skating still pepper our streets, the rapid increase in smooth concrete and innovative skater-made terrain has done so much to encourage younger skaters to roll and get creative. Maverick Industries‘ latest construction in Midsomer Norton is another creation that has continued to push the boundaries for what a skateboarder in Britain can do. 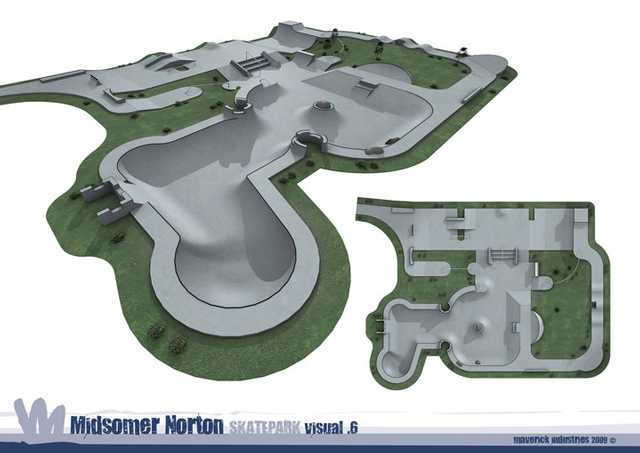 Christened the ‘Kate’ park by the Maverick team because of the invaluable input that began in the mid-90s from the BA3 skate store owners and friends, it’s a live physical manifestation of what the collective skate scene in Norton could ever want to skate. Maverick Designer, Ian Jennings, lived and skated in Norton for 14 years prior to the completiton of the concrete dream that stemmed from a simple petition from the man himself. The petition swiftly became a concept which soon become a real, flowing park through a little graft and a lot of passion from Maverick, the locals and the Manic Skaterz crew. Are you sick of living in a small town with no spots? It’s been proven time and time again that we can make it happen. It just takes a little effort, some patience and the motivation that comes from a real desire to get some banging terrain on your turf.

In just the first few weeks the unanimous reaction has been glowing. Ben Nordberg has already described it as the best park he’s ever skated, as have countless others. Such claims would often be dismissed as hyperbole but this really is the real deal because just look at it! It’s a tremendous looking park, but we wanted the full low-down from someone who’s got down and dirty with the park and left some of his skin on the concrete. We got in touch with one of Bristol’s finest and one big hoppa, Owen Hopkins. Fresh from skating the place he gave us his insight into Midsomer Norton…

“It is one of the best concrete parks I have ever skated, it has something that caters for everyone’s needs and has a very nice flow about it. I’ve skated many concrete parks and a common flaw is that you can only hit one obstacle and then your line is over. This is not the case at Norton; you can cruise around the whole park from the top, it’s really fun.

It offers you everything you need to be able to take stuff to the streets – it has handrails/stairs/ledges/manual blocks/flat bars etc as well as all the other stuff that is usually in a skatepark – hips/driveways/quarters/bowls etc. I really enjoy the driveway with astro turf in the middle and also the flat bar rail across the astro turf – they both make you go the full distance! The pump bumps which lead to a bank and then into the bowl are really fun to cruise around and get some speed together. I’m not really a bowl skater but have been told it has some really nice lines, I just can’t hit them!

It probably has everything I have skated before in one park which is what makes it so fun. I’ve done some things there that I have never done before, so I can imagine the youth of Midsomer Norton being in the X Games in a few years time!” 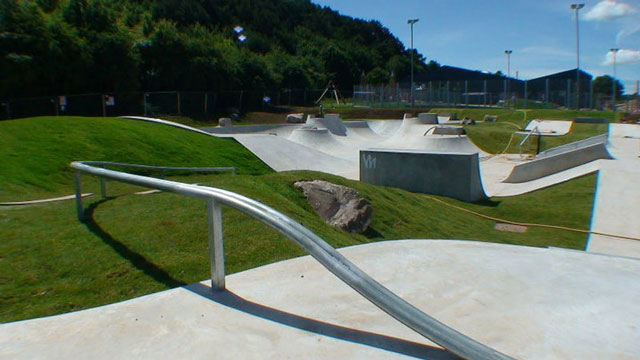 So if the words from Hoppa and Nordberg haven’t caused you to book train tickets to Norton already then have a look at this clip from James Harris featuring the Redlight and 5050 crew below. Skate everywhere and everything kids, if you aren’t satisfied then do something about it. Big props to everyone involved in the making of this fantastic park.

The first big event to hit Norton is the medieval themed Grand Skate Jam on August 14th. Further information is available here. For a teaser shot by Tim Crawley just watch the video below.

Midsomer Norton Teaser for Maverick Jam from TCTV on Vimeo.