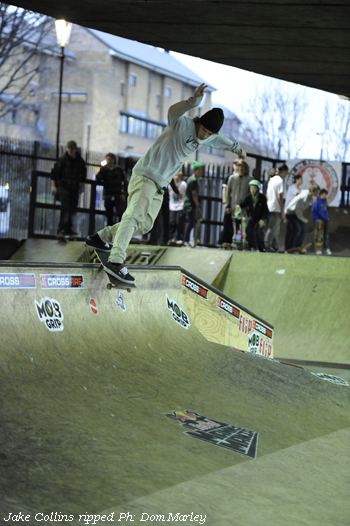 What a jam! We’re still recovering here at HQ from what was one of the most fun weekends to occur in the Crossfire Calender this year. Complete with an improvised schedule, an increasingly intoxicated MC, a decapitated pig’s head and a meaty portion of UK’s finest tearing Bay 66 a new hole, this year’s jam will go down as one of our favourites. New friends were made, and obstacles were opened up to be shut down once again. We can’t thank those of you that came down enough for making these events what they are.

Filmers, photographers and editors are currently going through everything captured from the day and piecing it into the video I’m sure many of you are eager to see, or depending on the size of your hangover yesterday morning, require to see to have any recollection of what actually happened. So while we prepare the feature, here’s a brief rundown of the day’s carnage…

The unsponsored jam kicked off at 1 and as usual was a rapid-fire display of how promising the younger generation of UK skateboarders are. It wasn’t rare for us to question the winner of each jam as to whether they were sponsored or not, I shit you not, the standards are growing out of control. But what a collection of radical to witness it was. Darius Trabalza dominated the driveway jam and shut down any chance of further competition only ten minutes in with a hardflip to flat, earning himself a Blueprint deck and £50 worth of Slam City vouchers. Jason Cloete continues to baffle his peers as to how he hasn’t landed a sponsor yet on the hip with a handful of perfectly executed flip tricks that he took effortlessly to the next obstacle, the wembley gap which was claimed by the late backfoot flip madness of Harry King. The unsponsored section concluded on the monster driveway meaning the kids could skate whatever the hell they wanted, but it was the rail who saw the most action (from a lot of sneaky bastard pro riders who were a little too eager for a shralp) and John Howlett had everything on lock to be the fourth and final unsponsored winner of the day, until the mini ramp jam at least…

This year saw more pros than ever before on the guestlist for the jam and with more kids on scooters this year, the setting was set for a constant stream of gnar in front of an audience that are fully down with skateboarding. In this intensely awesome and uplifting atmosphere, Daryl Dominguez upped his game at his local park and took the driveway comp with typical ease before Gav Coughlan could land his mammoth frontside flip to flat. The hip saw bangers from Smithy, Barber and some truly ridiculous stuff from Chris Oliver but Kill City’s Jake Collins – presumably high from the fumes of a dead pig’s head – owned the jam with consistency and a long list of tricks across the jersey quarter. The monster driveway saw a little variety in what obstacles were skated, resulting in two winners: Jamie ‘Arghhh’ Morley with a perfectly caught kickflip out of a hubba ledge 50-50 and Dan Wileman who attacked the rail in the way only he can, 270ing into a switch front board like a boss. But the vert wall turned the volume up to 11 even with Environmental Health trying to shut us down for noise, and Sam Beckett killed it. Backside flip over the quarter? Wait till you see the footage, I dare you to try and claim that he’s not one of the best skaters in the UK after seeing what he brought to the wall. 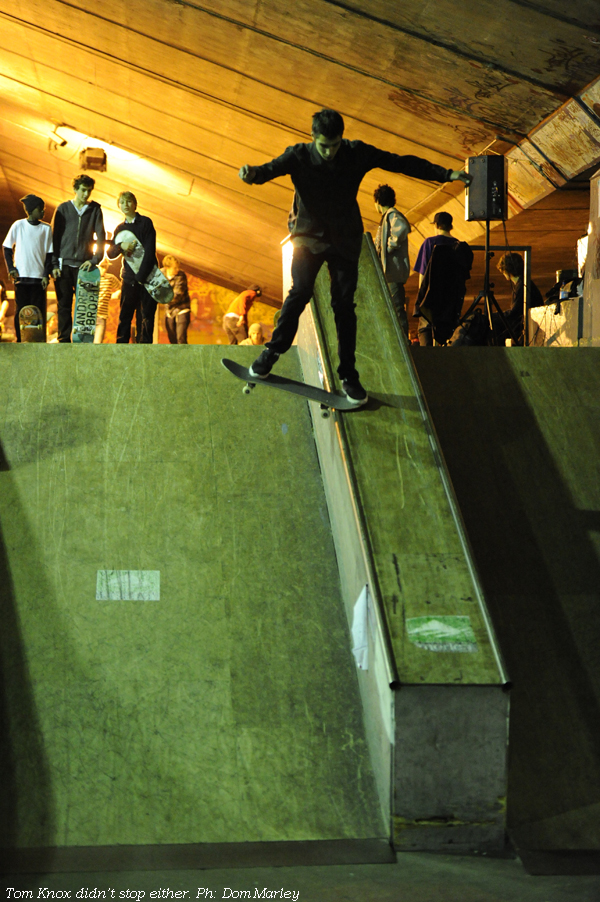 As always, we finished with a rip-roaring tour of Bay 66’s famous mini-ramp with Slayer providing the soundtrack. Greg Nowick once again opened it up and cleared any snakes with tricks just as baffling as they were consistent. Jed Cullen also took £50 by doing every fliptrick conceivable out of blunts, but the kid in the orange beanie Craig Coombs earned the biggest cheer of the night with what Brewster was craving for the past hour, the elusive blunt 360 flip. Kid totally killed it. Watch out for that road-safety dream of a beanie slaying mini-ramps near you soon!

Enjoy these photos as a taster of what’s to come this week, including full coverage of both the jam and the messy, messy after party and the greasy antics of UK skateboarders.

Props to all those that got involved and extra special props to the winners. Judging by the almost illegible handwriting in my notebook I can accurately write that I was a little excited to witness it all. I can only imagine how stoked the filmers must be watching the footage. Stay locked in. 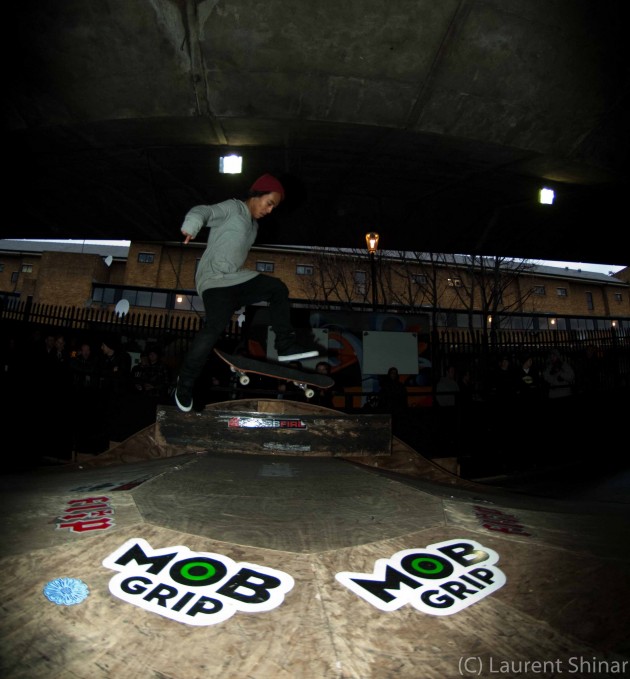