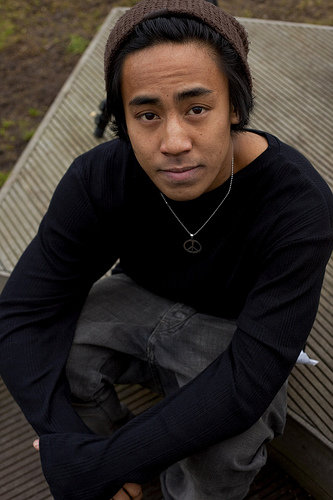 After laying down the goods at more or less every Crossfire event we’ve thrown in recent years, Daryl Dominguez has really made a name for himself this year. Many Londoners would have normally found him throwing down the best varial heels and 360 flips you’ve ever seen in Meanwhile 2 or Bay 66, but alongside an expanding trick selection Daryl has frequently escaped the big smoke while still maintaining that friendly local vibe and has proven to be one of the UK’s most capable at making a session awesome and fun. He also does backfoot flips every now and then and that shit should just be encouraged each and every.

After a busy year he joins us for another series of Reflections from 2010.

‘The only moment that ever exists is right now’ – Eckhart Tolle

Funkadelic at Glastonbury, tripped out.

I was in Holland for about a month in the summer, just skating and partying every night with good friends. Hit up the Dam AM then went to Basel for the ESC. Filmed a lot of stuff in between too.

I listen to a lot of music man, it’s murder asking me that!

Most satisfying trick filmed/landed and at what spot?

I really shouldn’t say… It’ll be in my Haunts in Sidewalk though.

Nick Remon, he seemingly came out of nowhere and killed it!

Kyron Davis if he ever stops linking chicks.

Finally getting this Haunts done, the Almost video and Euro trip.

This is just a pisstake. Switch front heel kills it.

Favourite skater… just goes to show he’s been killing it since day one!

Not a web edit in any sense but amazing. Tea, biscuits, Family Guy. Penquins are dope too.

My good friend Robbin Oost. He comes from Holland, smokes trees all day and does shit like this. Look at that shit! He’s fucking surfing!

Lucien Clarke’s Mag Minute. What a badman. RELAXED, stylish and as sound as they come too. The edit itself is dope, music fits like a charm.