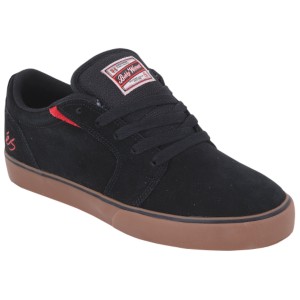 Back in July when we re-launched this mag we had the pleasure of trying out a limited edition version of the First Blood signature shoe from éS rider and Beast from the East, Bobby Worrest and we were not disappointed. Well actually that’s a lie, we were actually gutted that éS had not released the leather version of these in plain black once their collab with graf artist Cycle had passed as they are one hell of a skate shoe and in leather they are as slick looking as Ice-T and his mates on the front of the Power sleeve.

After searching the web for simple black versions I found these black, red and gum sole versions in suede and they were that good that I ordered two pairs. Sometimes if you love a shoe that much and think that it suits your needs it’s always worth investing for the future as they do become harder to find as time ticks on.

Worrest’s kicks come in various other colours and are full of the usual goodness like the System G2 malarkey in the heel and that griptape sucking, vulcanized sole that was just made for skateboarding. It’s the most simple skate shoe ever made and on par with the Etnies Faction- no fancy shit, comfortable as hell with a thin padded tongue with a beer inspired logo fitted with those elastic tongue-centering straps that hold your entire life together. What more do you want from a skate shoe? Everyone has their own styles but for me I need look no further.

Rambo was the last surviving member of his unit in First Blood, the movie that I guess inspired the name of these kicks and with that in mind I believe it’s worth fighting everyone in your path to get a pair of these before they become ‘last year’s collection’.