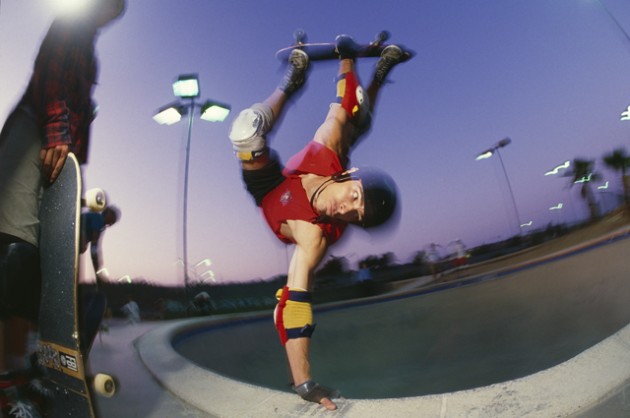 Back in the summer we wrote a blog article on how various letters that were written to Neil Blender back in 1986 had been found. After year’s of sleeping in a box under a bed in Surrey they were scanned and shared revealing their rarity. It was a stark reminder of just how innocent these times were before the web made it so much easier to communicate. Neil’s personal replies to these letters 28 years ago were as you kind of expected: fun, quirky, and accompanied by a few sketches of his infamous art, so we sent them to him via email and awaited a reply.

Note that this all happened in the same week that Alien Workshop’s demise started to appear online so this all felt like weird timing.

Neil was pleasantly surprised that we’d found the letters. He was also down for some words (on email), so Gorm, Jono Coote, Ray Calthorpe and Paul Gonella throw down some initial questions that we hoped would be answered and then followed up on another mail. But alas, it didn’t happen. The web is no place for wasting precious time for someone with the creative skills of Blender, so what you read here is what came back.

Neil is one of skateboarding’s cherished few who really set the tone with his personality and quirky, creative skateboarding. He brought us a sense of fun that was intangible and priceless at the time, defining what skateboarding stood for by creating a magical world of his own – one that encapsulated so many worldwide. He was a rare breed in comparison to some of today’s cloned sportsmen within a capitalist, self aggrandising culture, but this was back in the 80s and 90s and shit moves on. As a result, Blender’s legacy will remain in the upper echelons of skateboard history forever, and his style, well that speaks for itself. You still can’t buy that stuff either.

Been getting any skating in recently Neil?

Not as much as I should.

Now that you have seen these letters we found under Giles Bennett’s bed, do you remember receiving them or are they a blur?

The letters are a blur….things just fade I guess. It’s strange to see letters from that long ago too. Makes you realize how the mind changes as you grow. I remember Giles’ name when I saw it again though, not too common of a name I guess. G&S had a post machine that did letters, Hester said to get a bunch and answer some.

How many letters did you receive back the, did you respond to many?

Did you ever get really weird ones?

No weird ones really, I was hoping some girls would write in.

What did it mean to have fans back then?

It was cool, it meant someone took time to write. Mostly they wondered about new concaves and junk.

Social networks have somewhat killed the letter, what’s the main difference for you?

Just different. When you are on social networking you tend to get more aggressive, as it’s faster. The Mail involves a stamp and maybe walking to a mailbox. You have more time to think when it’s a letter. 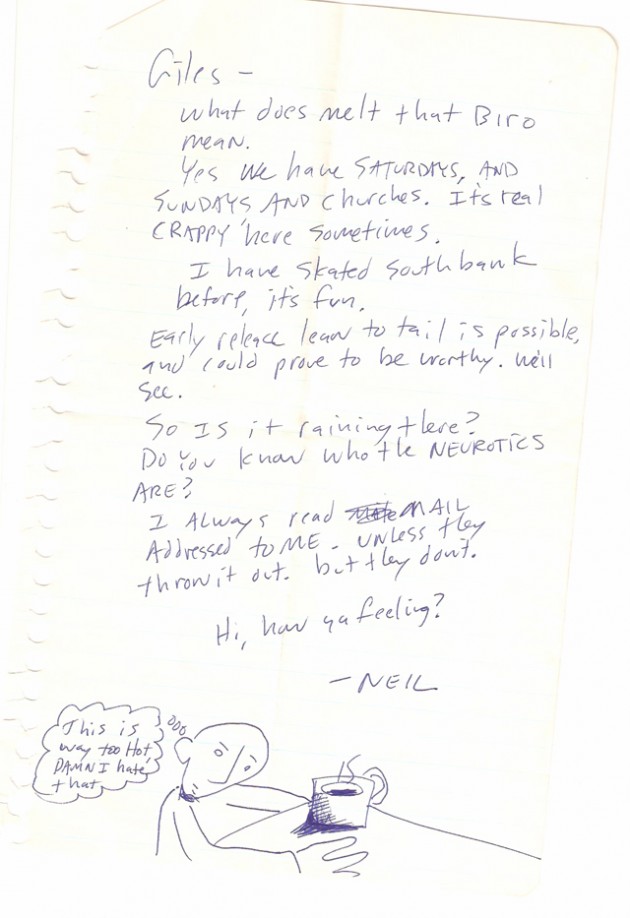 The social media grapevine brought the unfortunate news of the demise of Alien Workshop recently. Any insight into whether it will continue in a new era?

How do you see what has happened to the brand over the years and what does it mean to you?

Looks like there’s some prody out there, doesn’t mean too much.

Moving to Dayton, Ohio to start the company was an unusual move for back then knowing most were moving to California, separating yourself from the industry physically as well as aesthetically. What were the pros and cons of being so far removed from the place which by general consensus at the time was seen as the centre of skateboarding?

It was kinda weird, way different than California. The rent was way cheaper there. Pretty cool at first. The winters there are gnarly.

Looking back, what were the highlights of how the brand evolved creatively over the years.

Dyrdek and Pitre did some hot moves back in ’90.

Was there a particular graphic that really sticks out as being ‘the one’ that defines the company?

Probably the first one Mike Hill did. It just has lettering and a sun flash in the word.

(Hearsay has it that if you view this logo on its side, it actually spells Neil backwards with the A as a B for Blender)

What about videos, any particular one that you’re you most proud of?

Memory Screen was very different from other videos released at the time, what were your experiences of how it was received?

Some liked it, but not too many at that time.

What about adverts, do any in particular define AWS in your opinion?

Don’t know, they’ve been doing it for a while. Could be anything really.

Are there any skaters that never made the team that you really wanted on back then?

Can’t think of any.

Tell us something about the making of one of the videos that nobody knows.

J Mascis let us use “A Little Ethnic Song”, he just wanted some gear in trade.

You’ve had a lot in common with J. Mascis over many years now, do you remember the start of that relationship?

I met J in LA in ’89. They played a show, became friends. Went to Amherst and some other spots near Boston. He’s a good dude.

In a weird twist of fate we bumped into J Mascis in London the same week Alien Workshop went down. This little chat was totally unprepared and filmed on an iPhone. J had a cold.

What music are you feeling at the moment?

Devo, The Minutemen, The Skilletlickers.

What do you do when girls come round? (Ref to G&S’ ‘Stun’ video)

You show off, then get hurt.

Who, if anyone, do you find influences your artwork? And is there anybody’s work who you’re digging at the moment?

My Mom, my friend Hago, my brother and sister drew a lot when we were younger. I’m the youngest of 3. Picasso, Van Gogh, Monet, Escher.

No they are different. Skating is harder to get involved with, a lot of driving. Art you can stay in an area and do it.

How much work did you put into your Vans shoe this year?

Helped with the colorway and the art around the bottom. The designers do all of it really.

Nice turtle by the way.

Thanks. I made the original out of surfboard foam from Skip Frye’s shaping room when he was in Pacific Beach. Stoked they included it in the shoe package.

An interlude on SMA…Debunker features a voice claiming that ‘1-in-40 people have been abducted by aliens’ – which Workshop rider past or from the final team would you bet on being in the 1-in-40 club?

Talking of Dyrdek, how would you compare the contests back when you were on the circuit to Street League, X-Games etc to today?

All different. People are getting way gnarlier now and there’s more money in it. 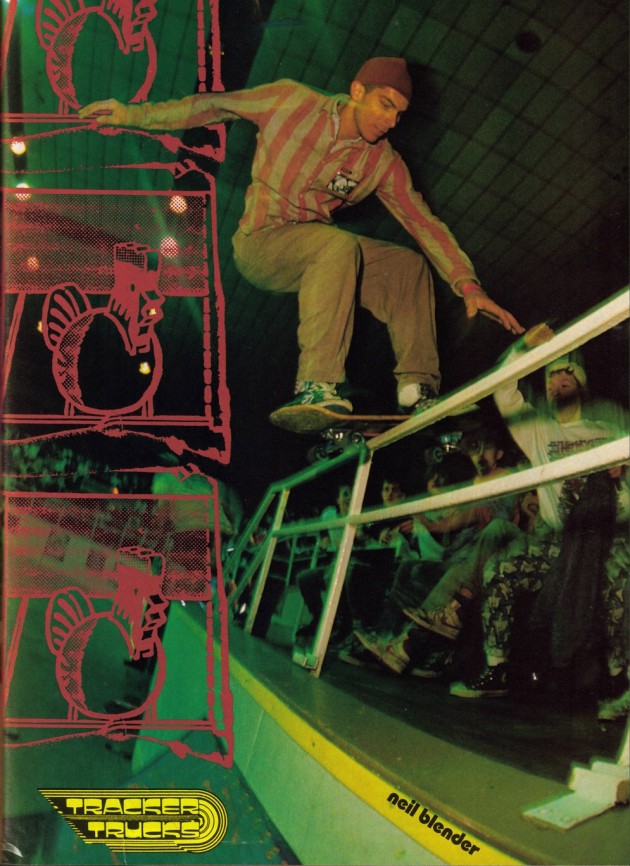 Ray was 16 when he saw this Tracker advert and it seriously fucked him up. Definitely one of his fave skate photos ever. What the fuck were you thinking?!

Don’t think I pulled that.

Do you think that kids should exit by nose wheelie of Newest Deals and not nollie out? What’s the lay of the land?

Who would be on your all time fantasy skate team?

Lance Mountain, Chris Miller, Alex Perelson, Peter Hewitt, those would be the main dudes, then there would be a “Handplant” crew: Jason Jessee, Grosso, Mike Conroy, Navs, Lance again cuz his f/s handplants are radical!

Talking of Lance, will your band with him and “O” ever reform?

Only if “O” supplies all the gear.

There’s a photo of you that you may not have seen before skating the infamous Crystal Palace ramp here in the UK back in the day. This was shot by Don Brider and included in a recent feature on the spot.

Was good seeing those photos from Crystal Palace, the “blackmail” shot of Douglas learning inverts was great! 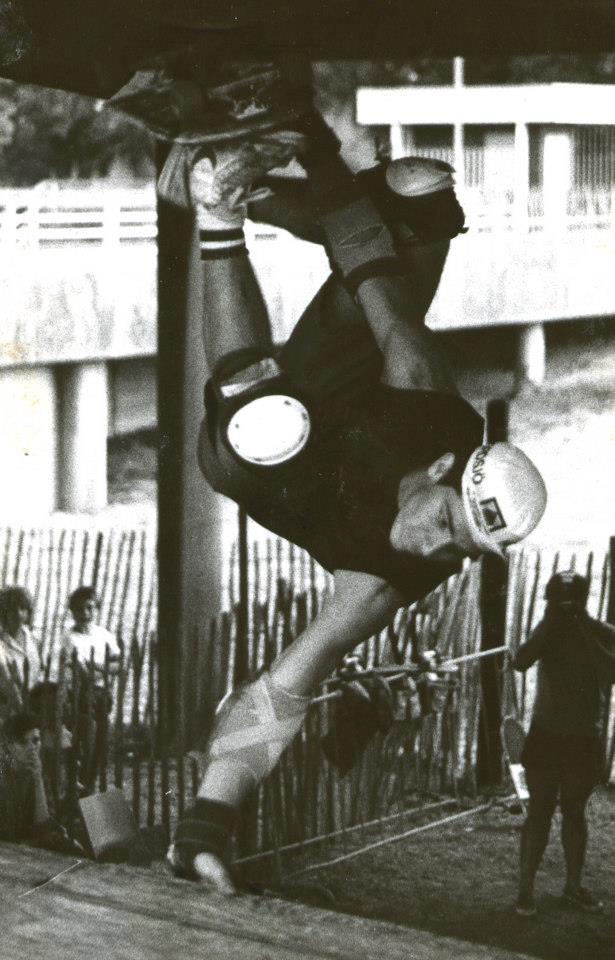 What tricks do you keep in your invention closet?

New Deal (front truck pivot to board), Gay Twist sorta, Lance did it too. Only cuz we couldn’t do Caballerials.

Billy Ruff and me at a pond, but later I saw Mike Folmer doing them and reverting them.

Ok, so you’re on a desert island, you can only pick two things from the following: skateboard, curb, paintbrush, guitar, super8 camera, a person.

Going with the guitar because there’s no way to develop the super8 and you can’t really skate on sand. I would try to get Chrissie Hynde to go even though I don’t know her. We would do some ELO covers.

So what comes next for the Sovereign Sect?

It gets shut down.

Is it still art?

Thanks to Giles Bennett who inspired all of this with his Lost & Found letters blog.