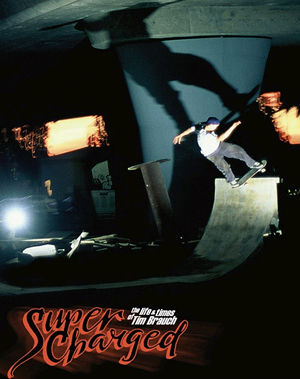 From all accounts, Tim Brauch was one of skateboarding’s most uplifting and proverbially ‘supercharged’ individuals who brought joy to many through his own optimistic and ‘go out and get some’ approach to life. Sadly, at the young age of 25 he passed away from a sudden cardiac arrest brought on from years of dealing with Wolff-Parkinson-White syndrome. Sudden deaths like his are an extreme rarity in people with the condition and it will go down in history as one of skateboarding’s most tragic losses. But melancholy is for the most part in the background of this production, it is in this documentary that we learn through family, friends and video footage of Tim himself how his condition neither worried him nor prevented him from going out and doing what he wanted to do. It is, from the off, a very inspiring watch as well a crushing reminder of mortality. Ultimately, the film is a celebration of Tim’s life and the joy that he infused in his friends and family is captured brilliantly by director Pete Koff who manages to instill it flawlessly into anyone watching.

To say that Tim Brauch ripped on a skateboard would be an understatement; he is one of the originals, blessed with the rare innovating spirit that can be attributed to few besides him.  Willingly ignorant of trends or industry/marketed progession, Tim skated how he felt he should skate, and doing so awarded him the respect of his peers, Steve Caballero, Jason Adams, Salman Agah and Bryce Kanights to name but a few. Their collective message is that watching Tim inspired them more than any other to have fun, be creative and make the most out of every day. The quote that adorns the DVD ‘this is going to be the best day ever‘, couldn’t be more appropriate and it’s not at all hard to imagine Tim saying that at the beginning of every single day.

In the hour long feature we witness a meaty chunk of skating from Brauch, Cab, Jason Adams and more from an era in which skating was unquestionably a lot more fun and pure. It’s rad, really rad to look back at the wonderful colours that even the best HD cameras aren’t designed to capture. But the overwhelming sensation you get from watching this video is the optimism, inherant in both the impromptu of-the-moment skating and shameless approach to taking what you want from life and giving all of those good vibes back. It is enough to inspire and motivate even the most pessimistic skater that there is joy out there for all those willing to go out and find it.

The DVD features over two hours of bonus features and all further information can be found here. You can donate towards and find information about the Tim Brauch Memorial Fund here. Look out for the film in your local skater-owned-store.

“The movie was off the hook, very inspirational story for sure. Tim was awesome and it’s great that his legacy still lives on today, go see this film if you haven’t already… it rocks!” – Steve Caballero

Tim Brauch is Super Charged! from etnies on Vimeo.