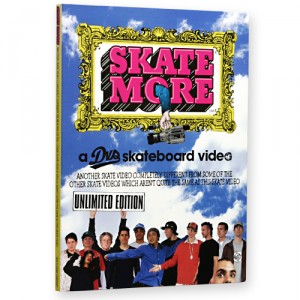 They say a critic can make or break a career… Well, here goes! When I first saw the first ever DVS skate video, ‘Skate More’, I told anyone within earshot that the video was good. It made me want to skate and the team had done well to hold back for a couple of years before releasing the final product. Daewon Song had a SCANDALOUS part in my view, and Chico Brenes was probably going to get his appreciation from the older crowd, not the ‘ever-hungry-for-blood’ youth. I still stand by these opinions, but those first remarks were stated post premiere party and after a long wait for something new to come. It’s true that even if videos get released at a near cardiac rate, the quality is far slower to appear…

So, this review comes many weeks after the initial premiere, after any skate forum spoilers have been spilt and opinions shared, and more importantly after that head-ache inducing free booze had left my body. Amen.

Initially, DVS play the humour card with the Monty Python inspired credits and skits. Fair Play- they work and stab a little at each riders persona. Now, ‘Skate More’ is a creation of American Colin Kennedy, who used to work for 411 (Bring back On Video! Ed.) so like Fred Mortagne had his ‘Frangle’ angle, Colin has the ‘slo-mo speed up’ button. The cheerful filmer doesn’t refrain from the odd slowed down image, which is good because often tricks get forgotten until the umpteenth viewing. I did notice that you can hear Colin, or whoever was looking in the eye-piece that day, laughing and cheering in the background on a few occasions. For professional filmers to do this, you know the trick you just witnessed was pretty amazing, so pay attention.

An interesting thing with this video is that it covers just about every base. Well, except after black hammers… Oh, and vert skating… But it’s true that the DVS team is one well rounded Street ‘Big Band’ (for lack of words) and when they play the music of every day ‘street’ life, it sounds right. Oh, and amazing of course! If you want speed you have Dennis Busenitz, Smooth and simple check Chico Brenes, clean and confirmed it’s Kerry Getz, the next level can be found with Daewon Song, today’s technology twinned by Mike Taylor and Jereme Rodgers, etc, etc…

Up until now, this video sounds like a sure-shot winner. Not quite- nothing is perfect. Even though the ams are where the money is at nowadays, you can’t help but feel someone whispered sweet nothings about Lucas Puig to Torey Pudwill. There is definitely something in his music and trick selection that had me experiencing deja-vu… Perhaps, it was just me..? Whilst in the domain of music, Kerry Getz definitely sticks out. I know (through background investigation) that Kerry wanted some Hip-Hop track for his part but was convinced a remixed 80’s track would come across more effective. True, but as journalists might say, his music is a ‘bold choice’ to say the least. Will it work? Won’t it? That’s really up to you.

Before this review becomes an epic essay on the true definition of visual media within an urban environment, or whether or not the hammer count was sufficient, take my words and check ‘Skate More’ out for yourselves. Really! I stand by my word, Daewon is SCANDALOUS and Chico Brenes has me singing Sade everyday.